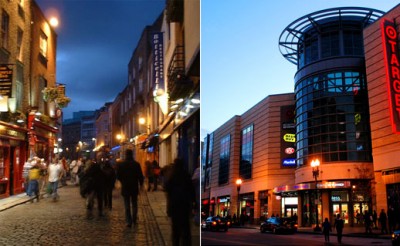 On the one hand you have authentic cultural destinations grown naturally, referred to as natural cultural districts (NCD)(image on the left), which attract creatives. On the other hand, you have developments that attempt to become such cultural destinations in one fell swoop, referred to on this site as corporate cultural districts (CCD)(image on the right). However, they tend to attract tourists and corporate employees with higher salaries than creatives. Here are the objective differences why, from a placemaking point of view: