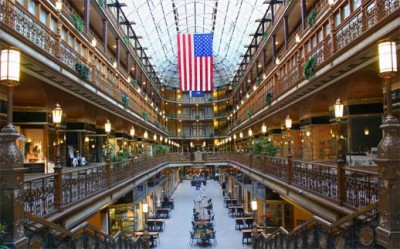 Visitors to historic districts in older cities around the world will often come across majestic public spaces, but it’s rarer in the U.S. because it’s such a relatively young country. One of the few examples of such places, one may be surprised to know, is in Cleveland, Ohio, known as the Old Arcade and is even said to be modeled after the Galleria Vittorio Emanuele II in Milan, Italy.

The first arcades were built in Paris in the early 1800s as reflection of the industrial age, offering a covered passageway connecting two busy streets, lined with shops showcasing the retail wonders of a growing goods-based economy, with the glass and steel versions appearing in the 1840s, and toward the grand multi-story versions by the late 1800s. By 1860, the Civil War and railroad networks connected Cleveland’s 43,000 inhabitants to the rest of the economy, leading to it becoming the 15th largest city by the end of the century and providing the financial prowess for the Arcade’s construction in 1890 at a cost of $867,000 ($20 million today).

In 1973 the five-story, 300-foot-long, 100-foot-high Arcade became Cleveland’s first building to be added to the National Historic Register, only the ninth nationally. In 2001, the Hyatt Regency Hotel contributed to the $60 million renovation of the building, occupying the top three floors, but keeping the lower two floors open to the public as an ever popular destination of shops and restaurants.

Next time you’re in Cleveland, be sure to download the CityProwl tour, a 30-minute ipod-oriented guide to the city’s best experiences, including of course, one for the Arcade.