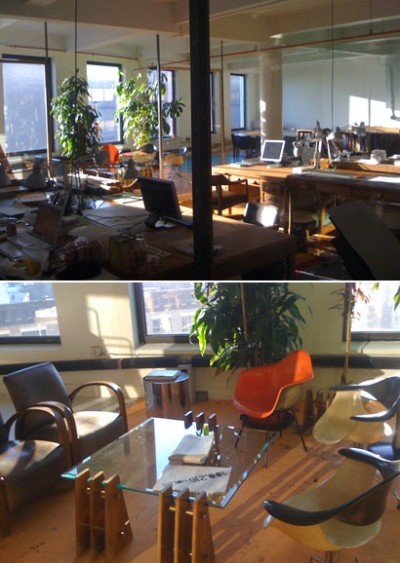 There’s no question what the first green business incubator is – it’s the Environmental Business Cluster in San Jose in 1994, christened by then Vice President Al Gore and still going strong. However, as you can see by its website (and the fact it started in a suburban office park with cubicles, though now located downtown), it’s not a coworking site. Btw, check out its graduate list of companies – I helped found the firm called Global Opportunity Villages in that incubator – a bit too ambitious and ahead of its time, but the description should sound familiar :)

So, what’s the first coworking site for green businesses, that is, an open plan, cafe-like destination typically in a natural cultural district, for entrepreneurs, started and run by entrepreneurs? While I’m sure many people will lay claim to that, one clear candidate is Green Spaces in Brooklyn, New York. It’s best left to cofounder Jennie Nevin to better understand why:

“My background is in finance but I have always thought there were a lot of opportunities in the emerging green economy, especially after taking graduate environmental courses at Harvard night school right after college in 2001. Around 2005, when I was working at Merrill Lynch in New York I realized that the economy was starting to shift and people were starting see the financial opportunities by becoming green, whether it was solutions to water shortfalls, more sustainable agriculture or a long-term energy solution. I started a group then called Green Business Leaders to bring together emerging green activists from all fields and we started meeting for intimate cocktail hours every other month in Manhattan, featuring leaders such as the executive directors of the Rainforest Aliiance and Gaia Institute. At this time many emerging green start up companies were popping up and from the networking groups I realized they were all working from home – I knew it was lonely and difficult working out of a small New York apartment.

We started Green Spaces to meet that need. We opened in May of 2008 with a launch party of over 100 green-minded folks and 3500 square feet in downtown Brooklyn. It has now been expanded to about 7000 square feet with over 15 companies ranging from sustainable fish sourcing to carbon sequestration projects. We also have a rotational internship program connecting emerging talent from the local universities such as Columbia, and host a monthly workshop series.”

Do you know of any coworking spaces for green businesses?