While we may be familiar with city policies promoting car-free living, what are the examples in the built world?

That’s where you need to visit the Moda condominiums in the Belltown district of Seattle, Washington. Moda is a model application of truly attainably-priced housing via reducing housing size and eliminating parking spaces. The evidence: 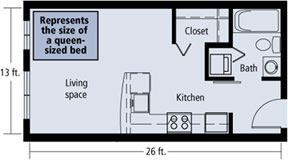 To respond to the inevitable reaction, “300 s.f.?! Who can live in such a tiny space?”, the developers wisely built several of the smallest units as demonstration models. As shown in the 338 s.f. model to the left, it includes a bathroom, kitchen, walk-in closet, eating counter and areas to fit a desk, table and foldaway bed, with a smaller fridge and dishwasher.

Are most U.S. Americans ready to give up on the GM-homebuilders 1939 vision of the American Dream? According to these responses regarding Moda, no, not most of them, but they’re not the target market either. Then again, based on the financial crisis, the average U.S. home buyer isn’t exactly able to afford the average-sized U.S. home either.

What do you think?