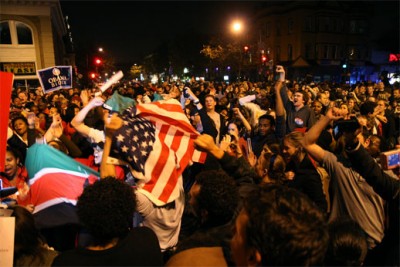 What is the American Dream?

From the Declaration of Independence (in a more religious time): “We hold these truths to be self-evident, that all men are created equal, that they are endowed by their Creator with certain unalienable Rights, that among these are Life, Liberty and the pursuit of Happiness,” and from from Wikipedia: “The American Dream is belief in the freedom that allows all citizens and residents of the United States to pursue their goals in life through hard work and free choice.”

However, millions of jaded post-Depression U.S. citizens were ready to embrace a new vision of the American Dream by the time the 1939 New York World’s Fair“>New York World’s Fair hit in 1939, where General Motors introduced the freeway-based World of Tomorrow in their Futurama exhibit, with the following quotes from their exhibit, “the rights of way have been so routed as to displace outmoded business sections and undesirable slum areas whenever possible” and “elevated sidewalks actually double the width for auto traffic.” See YouTube video. Meanwhile, the home builders (later to be known as the National Association of Home Builders – NAHB) was presenting the modern marvels of suburbia with modern kitchens, air conditioning and garages far away from the city. It’s no coincidence that the same homebuilders successfully lobbied Congress for twenty years to enact legislation legalizing suburban zoning and financing programs that made it less expensive to buy a new home in suburbia than to rent in the city, while non-whites were ineligible. Nor was it a coincidence the 1956 Highway Act provided the equivalent of $200 billion to establish our freeway system.

It didn’t take long to see the long-term impact. From an October 1973 issue of The Freeman titled “The American Dream”, by John E. Nestler: “Whereas the American Dream was once equated with certain principles of freedom, it is now equated with things. The American Dream has undergone a metamorphosis from principles to materialism. When people are concerned more with the attainment of things than with the maintenance of principles, it is a sign of moral decay. And it is through such decay that loss of freedom occurs.” When you ask people what vision pops into their head when you mention, “the American dream,” it’s often still a big house and an expensive car, whether they embrace it or not. We’re still a culture known for acquiring stuff.

So the answer to the question, “What is the American Dream”? Finally, it will truly be up to us individually and as communities, to collectively, freely decide, and crowdsourced placemaking is a pretty handy tool in that regard.