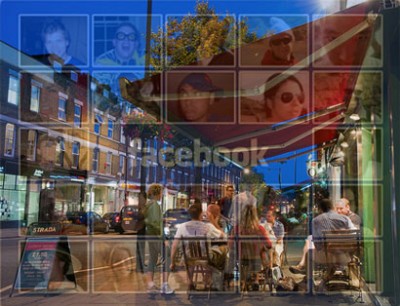 Now that the American Dream has come full circle and is once again ready to be defined by you, what would that be for emerging generations? Well, since they seem to be spending so much time on Facebook, maybe it’s worth checking out how that would be manifested in the built environment. Keep in mind that anyone not part of the Facebook generation will probably be just as uncomfortable with the following vision as they are with Facebook :) …

– Facebook is a social network that provides more of a human profile to an email address or listed name invited to an event. For gen yers, it’s replaced email, and for many, supplanted Evite. People you don’t know remain anonymous, but you’re given the option of discovering what your like-minded interests are among people you’ve met, from salsa dancing to foreign indie movies to specific humanitarian causes. A facebook town (small caps, otherwise it’d be a corporate community!) would have a network of managers of cafes, galleries and businesses actively working with group leaders of said interests to accommodate them in the physical world via special events (fundraising party) or an ongoing scene (salsa lessons), or even to start a new business, like a green veggie restaurant, Elements.

– Facebook is largely spontaneous. It’s ‘Wall’ is each person’s own water cooler (though not in real time), and you can instant chat with anyone currently online. Residents of a facebook town would expect the same spontaneous ways to communicate, and that means social public spaces. Since it’s rather difficult to have a spontaneous social encounter in an intersection or a sidewalk, it’s no coincidence we’re going through a pedestrianization movement. A facebook town will feature multiple piazzas (pedestrian-only squares) and paseos (pedestrian-only streets), much like Venice.

– One of the benefits of Facebook handling the small talk (where are you from, what do you do, what’s new with you) via its profile and status features, is that you can move on to more meaningful conversations when you meet up with people. That is, it’s very rare to go from small talk to meaningful conversation, but since people already have a running small talk exchange with their buddies on Facebook, it’s very common to see, “Hey, let’s meet for dinner so we can really talk!” People need to be warmed up to talk. That translates to more third places, from coffeehouses to outdoor dining courtyards where people can sit and stay awhile.

Btw, CoolTown has a nascent Facebook group here! Come aboard!