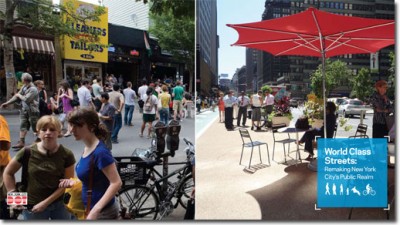 What happens when you combine one of the world’s premiere creative cities with the world’s premiere urban designer for pedestrianized cities? Specifically, New York City, via their Department of Transportation (NYCDOT), arguably the most innovative government agency in the U.S., hired architect Jan Gehl, who has done more for the pedestrianization movement than anyone, to ensure the city becomes a world class benchmark in that regard.

The first tangible result from this collaboration is the rather remarkable 50-page report, World Class Streets, refreshingly stocked with more illuminating photos and diagrams than text. From NYCDOT’s enlightened commissioner, Janette Sadik-Khan, “The times are changing, from the problem of global warming to worldwide competition among cities, and our streets need to change along with them. Until now, New York has not embraced a broad strategy for developing and caring for the public realm, but today, the world’s best cities are strongly focused on quality of life**. Designing streets as great places for people and not just as utilitarian corridors for vehicles takes full advantage of New York’s density and vibrancy – it’s a new frontier in ensuring that New York remains the greatest city in the world.” See the press release here.

The report is the vision for New York City’s pedestrianization commitment, and what’s coming in the next few months is the ‘how to’; a Street Design Manual of policies and design standards to be used by all city agencies. Best of all, the city has already started the implementation of the vision at the highest level with their Plaza Program, transforming auto-oriented streets into pedestrian-only plazas. The Street Design Manual will be completed just before this program begins its official design phase. Implementation inspiring policy, rather than the other way around… nice.

Check out the ‘world class streets’ programs the city already has in place toward this goal in this previous entry.