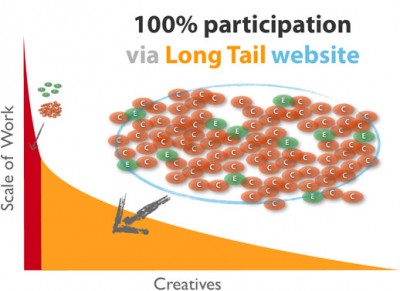 The new administration promises to bring true meaning to ‘by the people, for the people‘, and challenges us to take action. So what’s a good starting point as far as growing an economy, building places and improving quality of life for creatives?

This entry provides an existing starting point, and a new starting point. The image above shows the new starting point for creatives, where the Long Tail (everything but the ‘most popular’) is the emerging foundation for growing a creative economy, establishing inspired third places to socialize and constructing green homes we can actually afford. A Long Tail website (ie an Amazon/Yelp/iTunes/YouTube for creative content/jobs/projects) is merely the tool for allowing the creatives to crowdsource such objectives.

The image to the left is the existing starting point – the ‘economic producers‘ are those companies, government agencies and organizations that control a vast amount of the economy, and culture. Now, how do we go from identifying such economic producers, followed with instituting a ‘by creatives, for creatives’ system, to achieve the new starting point? An animated video will explain that in the next entry, and perhaps bring clarity to what is presented here.