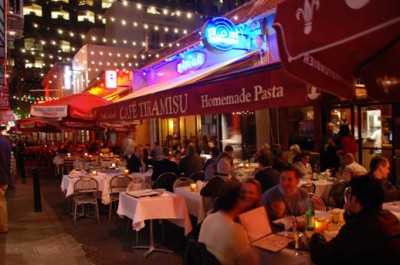 Let’s get right to it.

Pre-Phase. Start with identifying what kind of outdoor cafe scene to crowdsource, whether it’s a walk, alley, square, stage row, or even plaza if you’re the ‘change the world’ type. Or a convergence of two or three types.

Phase I. Develop a defined vision based on the previous phase to attract a beta community of 500 supporters of people who would frequent such a place if it were built. You can build this through monthly events or gatherings, or just a strong campaign. Ideally, the regular events would be held on the proposed site.

Phase II. Identify either an anchor or lead restaurant/cafe/coffeehouse business willing to be the first recipient of the beta community’s energy, such as with Elements in Washington DC. It’s not a hard sell, considering you’re asking a business owner if he/she is willing to have the community ensure an established customer base before opening day.

Phase III. Here’s the fun part. Now that you’ve got a participating business as a precedent and a growing beta community (0.5-1% of the city proper population is effective), you now have Long Tail leverage to present the same opportunity to a collective of businesses around a compelling outdoor cafe space that is positioned to become a cultural destination and institution in the city. Not only that, but this also provides significant momentum to secure support from the local government in terms of helping fund the public space itself.