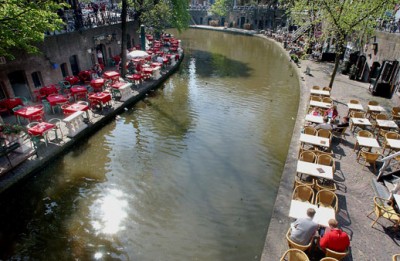 My favorite feature: Reader Experiences. Please send yours, whether you live in or visited a place worth sharing to inspire a higher quality of life. This one is from Dick de Jong of Brandaris Placemarketing in the Netherlands.

“In addition to your outdoor cafe district, stage row, alley, plaza, here in the City of Utrecht, the Netherlands you can find the ‘outdoor cafe canal’. Built nine centuries ago, there is a unique extra lower level along the canals in Utrecht. These levels used to give access to cellars (wharf basement storage) when the canals were primary commerce routes, and now those spaces are home to restaurants and cafes.

There are two cities in the world that have two levels along the canals: The Riverwalk in San Antonio, Texas and Utrecht, the Netherlands. 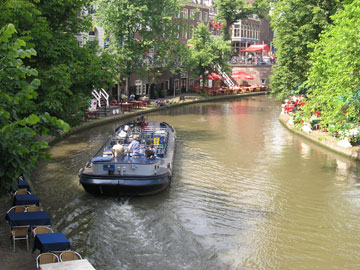 Utrecht is located in the heart of Holland and was established by the Romans in 47AD. The location on the banks of the river Rhine allowed Utrecht to become an important trade centre in the Northern Netherlands. The growing town Utrecht received city rights in 1122. When the main flow of the Rhine moved south, the old bed, which still flowed through the heart of the town became ever more canalized; and a unique wharf system was built as an inner city harbour system. On the wharfs, storage facilities (werfkelders) were built, on top of which the main street was constructed, lined with homes. The wharfs and the cellars are accessible from a platform at water level with stairs descending from the street level to form a unique structure. 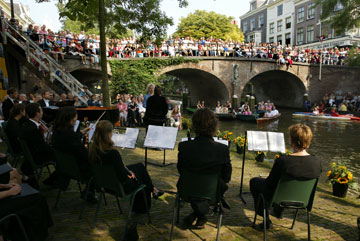 Utrecht’s Oudegracht is a curved canal due to its origins as an arm of the Rhine. In the last century its cellars became used for cafes, bars and boutiques, and in the heart of the city the wharfs are used as terraces for those venues. The canals, with the two levels of wharfs and streets are often used as an open air venues for festivals.”

Is it any coincidence Utrecht features such an innovative experience?
“Today Utrecht is a growing city with a population of 300,000. The city developed from a medieval religious city to one with the best Universities of Europe. Today it’s a ‘creative city’ with lots of knowledge workers and a talent pool from a very young population of 60,000 students. 51% of the professional population has a university level or higher education, 32% are working in creative arts and scientific professions such as publishing, finance and IT.

There is also a new use for the canal boats, as a ‘beerboat’ delivering drinks to the restaurants.”