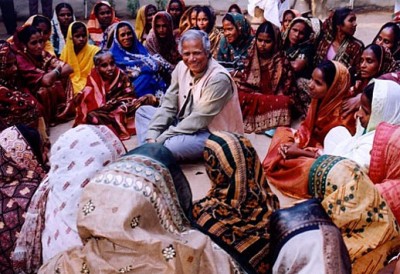 If you’re a regular reader and haven’t heard of Muhammad Yunus, you probably should. He essentially invented a way to crowdsource a banking system and a local economy in the poorest regions of the world. Now if you can do that, what’s stopping you in achieving anything less difficult or heroic?

It started with poor women in Bangladesh who couldn’t receive loans. Why? Because to the banks, the answer to the question ‘Are the poor credit-worthy?’, was ‘No’. In the spirit of crowdsourcing, Yunus instead asked what he thought the real question was, “Are the banks people-worthy?” As he says, “When I discovered the answer was no, I realized it was time to create a new bank.” Starting with his first loan of $27 to 42 families in 1974, Grameen Bank today loans to over 7 million people (97% of whom are women) in 78,000 villages in Bangladesh, with a repayment rate of 98.6%. It has not taken donor money since 1995, been profitable for all but three years of its existence, and 64% of its borrowers have risen above poverty after five years.

In his book, Creating a World Without Poverty: Social Business and the Future of Capitalism, here’s what he has to say that may be helpful to those of who are fascinated, but also intimidated by entrepreneurship:
“People should have options to choose from, including both jobs and self-employment. Let people choose what suits them. Many people do both. This mistake is linked to another blind spot in standard economic thinking: the assumption that “entrepreneurship” is a rare quality. According to the textbooks, only a handful of people have the talent to spot business opportunities and the courage to risk their resources in developing those rare opportunities. On the contrary, my observations among the poorest people of the wold suggestâ€“and decades of experience by Grameen Bank and other institutions confirmâ€“that entrepreneurial ability is practically universal. Almost everyone has the talent to recognize opportunities around them. And when they are given the tools to transform those opportunities into reality, almost everyone is eager to do so.”

…and on the power of social networks, a key component of crowdsourcing, and the fundamental reason for the bank’s effectiveness:
“No one who borrows from Grameen Bank stands alone. Each belongs to a self-made group of five friends, no two of whom may be closely related. When one of the five friends wants to take out a loan, she needs approval from the remaining four. Although each borrower is responsible for her own loan, the group functions as a small social network that provides encouragement, psychological support, and at times practical assistance in bearing the unfamiliar burden of debt and steering the individual member through the unfamiliar world of “business”.

So the question is, “Is your city people-worthy?” Not only do you know the answer, but you are the answer.