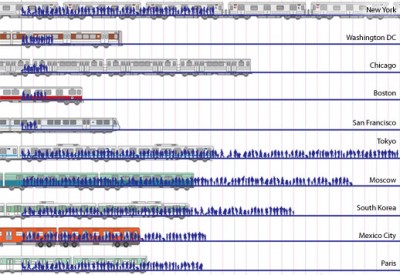 What better way to understand how the world’s transit systems compare than to display it graphically in one image, thanks to GOOD Magazine, which is a periodical about exactly what you’d think it’d be about.

In the graphic above, the trains represent the total system track length, and the people symbolize the total ridership. Click here for a much larger version of the graphic, though it may go right off your browser window.

The one thing you’ll notice right away is that apparently, riding transit in the U.S. isn’t nearly as cool as it is in other countries. New York City is the only city by far that compares in ridership, and even then, it requires a lot more trains to do so.

Perhaps the auto industry crisis, energy crisis and even housing crisis (too many big homes in sprawl that too many can’t afford) can be explained with this one graphic, not that the U.S. system is the transportation model for others to follow (as is often the U.S. view), but that the U.S. is undergoing a massive market correction in having to catch up with the model transportation system held by the rest of the world.