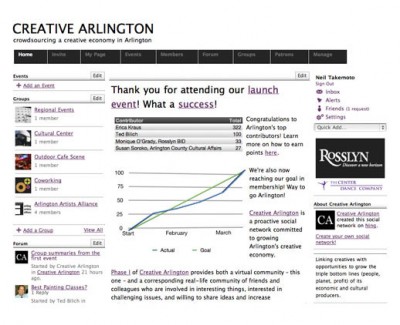 Arlington County, Virginia has long been considered a creative class mecca, with a high concentration of educated knowledge workers. Arlington has also been attracting cultural creatives (socially and environmentally conscious) and rengens (those effecting a renaissance level of change), all three of which are defined on this site as creatives.

One thing missing though, was an identifiable community of creatives that could collaborate to define Arlington’s creative economic and culture future. Thus, Creative Arlington“>Creative Arlington was born. After yours truly spoke at a Leadership Arlington workshop in November of 2008, attendee Ted Bilich took it upon himself to work with CoolTown Beta Communities to understand how the area could develop more attainably-priced housing for ethnic populations. That lead to looking to mobilize young leaders in those populations, realizing most young leaders are interested in diversity more than furthering one cultural viewpoint, then focusing on a social network to allow those young leaders to collaborate with implementers.

Three months later, Creative Arlington held its inaugural event, a happy hour featuring break-out groups that allowed people to work together to present creative solutions in making Arlington a better place to live, work, play and learn. You can peruse the brainstormed notes from the groups here. It will also be a pioneer in establishing creative economy talent matchmaking system.

What kinds of creative communities does your city have? If not, what do you think the obstacles are? Comment below.