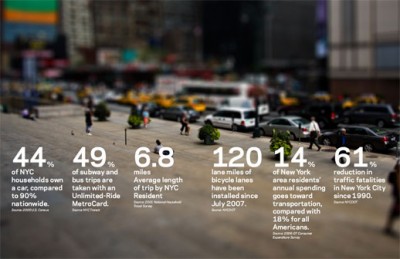 Regarding this cultural and economic transition of communities prioritizing a pedestrian infrastructure rather than an auto one, 15 days ago the entry â€˜People over cars’ begins to hit mainstream media stated, “The next domino to fall would be Fast Company Magazine – stay tuned.” We didn’t have to wait long, and we’re definitely hitting the tipping point when a business magazine like that has a headline like this, Suburbia R.I.P..

Now first of all, this site is not about anti-suburbia, it’s about pro creative placemaking. If people prefer suburbia, that’s their right and privilege. What’s significant about an article like this though, is that a business magazine is making the case that investment in cities vs suburbia may be a wiser financial decision,

“The demand for suburban homes may never recover, given the long-term prospects of energy costs for commuting and heating, and the prohibitive inefficiencies of low-density construction. The whole suburban idea was founded on disposable spending and the promise of cheap gas. Without them, it may wither. A study by the Metropolitan Institute at Virginia Tech predicts that by 2025 there will be as many as 22 million unwanted large-lot homes in suburban areas.”

The article then highlights the pedestrian-oriented solution, as defined by a nonprofit group of urbanists and a rather familiar economist supporting creatives:

“If the suburb is a big loser in mortgage crisis episode, then who is the winner? Not surprisingly, the New Urbanists, a group of planners, developers and architects devoted to building walkable towns based on traditional designs, have interpreted the downturn as vindication of their plans for mixed-use communities where people can stroll from their homes to schools and restaurants.

Richard Florida, a Toronto business professor and author of Who’s Your City?: How the Creative Economy Is Making Where to Live the Most Important Decision of Your Life, argues that dense and diverse cities with “accelerated rates of urban metabolism” are the communities most likely to innovate their way through economic crisis. In an article published in this month’s issue of The Atlantic, he posits that New York is at a relative advantage (see evidence above), despite losing a chunk of its financial engine, because the jostling proximity of architects, fashion designers, software writers and other creative types will reenergize its economy.”

What’s your opinion on this highly debatable topic? Comment below…