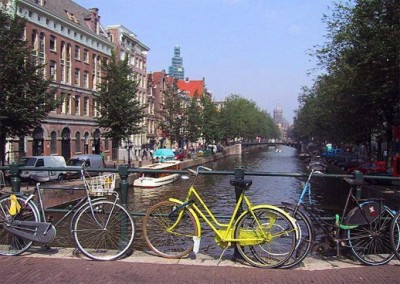 Amsterdam, The Netherlands already has a global reputation for being a biking city (within a biking country), which is fast becoming a poster child for a 21st century infrastructure that isn’t reliant on automobiles. Not coincidentally, a walkable built environment is much more conducive to a digital infrastructure replacing an asphalt one, which is allowing Amsterdam to also now lead the world in raising the bar for what being green is.

– 500 households will pilot a $1 billion energy-saving smart grid system from IBM and Cisco aimed to cut electricity costs. By 2011, almost all of Amsterdam is expected be on a smart grid;
– 728 homes will pilot a financing program to buy green elements from energy-saving light bulbs to ultra-efficient roof insulation.
– Street trash will be collected by electric trucks;
– Electronic displays at bus stops will be solar powered;

Boulder, Colorado has taken a lead in the U.S., partnering with Accenture and Xcel Energy to complete a $100 million smart grid by June 2009, where households have already reduced their energy output by 50%.

The point is, Amsterdam and Boulder are leading the green renaissance because they already have the infrastructure and urban fabric that attracts creatives.