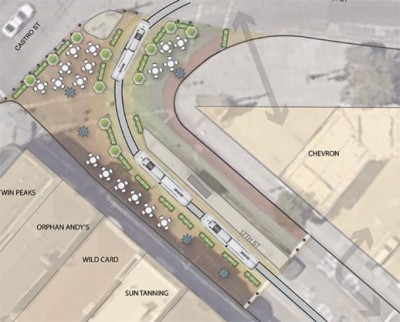 New York City may be playing the lead tune when it comes to pedestrian-only/car-free placemaking, but San Francisco is following right along to the point it’s sounding like a duet.

In 2008, Manhattan closed several key streets to cars on Saturdays with Summer Streets, and San Francisco followed immediately with Sunday Streets. On February 25, The San Francisco Chronicle reports that the mayor is considering closing the city’s main thoroughfare to cars, and the next day Mayor Bloomberg announces 36 blocks starting from Times Square were going car-free.

The latest is San Francisco’s plan to turn an intersection into a pedestrian-only plaza (pictured), much the same way a congested intersection in NYC’s meatpacking district is now the pedestrian-only Gansevoort Plaza. While temporary, if the public supports it, it’ll go permanent. In fact, the City is so confident it’ll be a success that they’re already looking at other sites. Read more at Streetsblog.

You can bet this duet will turn into a symphony with other cities soon enough.