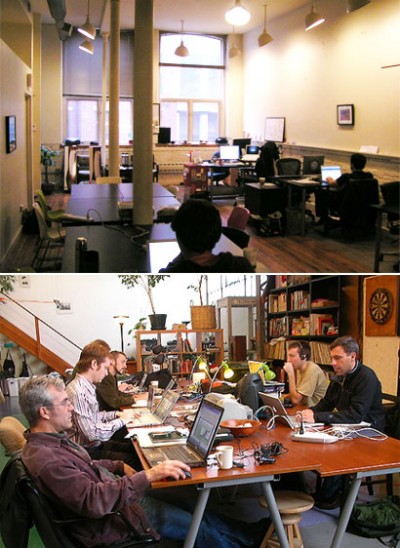 There’s no question coworking spaces are the place to work for independent creatives, but can it be a profitable business? The question isn’t raised in terms of how to make money off of independent creatives, but rather how to sustain a viable supply for the demand. As it stands, there still seems to be more free agents who are dissatisfied with working at home than there are coworking spaces to accommodate them, thus the popularity of coffeehouses during the day.

The general consensus among the first generation of coworking spaces is that the primary objective is centered on building community. As the founder of Citizen Space in San Francisco put it, “Designing your product for monetization first, and people second will probably leave you with neither,â€ and from a coworking partner in Saint Paul, Minnesota, “The reality of the situation is that freelancers want a baseline that is more than they’re willing to pay for, so it’s going to fall apart.” Most every coworking space is subsidized by a host company or sponsor, or just breaks even. However, they’ve clearly identified that there’s a demand, because people love the space, and the resident community of fellow entrepreneurs even more.

For instance, say you had a coworking community of tenants whose skill base was in Web 2.0, or collective interest was in the green movement. Then assume the tenants cared more about providing their services than marketing and making sales calls. The coworking space could have a connecting agent that handled this latter part for them, finding lucrative project opportunities from larger companies that had Web 2.0 or green campaign business needs. Many companies would gladly pay 5%, even 10% of a sizable contract they would have never been able to find or secure themselves, especially if someone else does it for them. A profitable coworking space can come from being able to find profitable clients for your members, which may even help you reduce rent.

Photos: Independents Hall in Philadelphia, and the more informal, intimate (and thus more affordable) Hat Factory in San Francisco, which is how restaurants are surviving in the present economy.