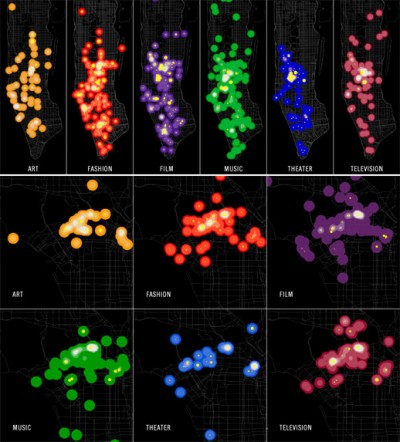 Can you visualize buzz? Elizabeth Currid, author of The Warhol Economy: How Fashion, Art, and Music Drive New York City and the must-read article, The Economics of a Good Party and Sarah Williams, director of the Spatial Information Design Lab at Columbia University’s Graduate School of Architecture, think so.

In their The Geography of Buzz study (shown above, Manhattan, New York City on top, Los Angeles below), social cultural hot spots are diagrammed based on the frequency and draw of cultural happenings: film and television screenings, concerts, fashion shows, gallery and theater openings, which in turn were based on 300,000 photographs over 6000 events from Getty Images capturing parties and social affairs from March 2006 to 2007.

The conclusions aren’t surprising in that cultural industry events tend to cluster spatially, but the authors state that it allows a better understanding for why clustering occurs in certain localities. The hot spots in New York City? The areas around Lincoln and Rockefeller Centers, and down Broadway from Times Square into SoHo, which coincidentally is becoming pedestrian-only. In Los Angeles, it’s in Beverly Hills, Hollywood, and along the Sunset Strip. According to the authors, analysis of the data showed that those actors not conventionally
involved in city development (paparazzi, marketers, media) have unintentionally played a significant role in city development. Elizabeth states, â€œPeople talk about the end of place and how everything is really digital. In fact, buzz is created in places, and this data tells us how this happens.â€

What it shows though, is where the most popular tourist attractions are, not where the up and coming creative destinations are, which is crucial to economic and cultural development. To achieve that, what would be ideal is to have this study measure only creatives, which is near impossible given their methodology. However, the folks at Citysense are already doing that!

Check out the buzz in the NY Times and Time Magazine, or the real buzz (from readers) here.