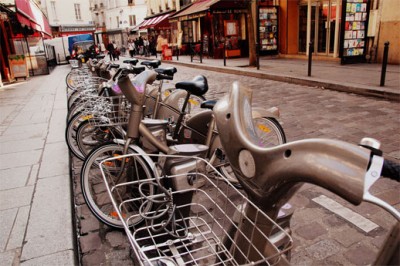 Some noted bicycle sharing systems from around the world:

Why the popularity?
– Paris’ bike sharing system nets over $5 million in revenue. The program is a revenue generator, not a cost, by letting the system operator sell ads in public places.
– 89% of Paris’ Velib members said the system allowed them to move around Paris more easily and 54% said that they traveled more in Paris because of it.
– 60% of the Barcelona’s users depend on the bikes for their commute.
– 50% of bike sharing trips made in France would have otherwise been by train or bus, 7% by car, and 20% in Paris said they use their cars less.
– 62% of Paris’ users say the program reduces their transportation costs.
– 96% of Velo users Lyon, France in the first year had not ridden in Lyon before – that says a lot about the potential health benefits.

Photo of Velib bicycle sharing system in Paris by LWY.