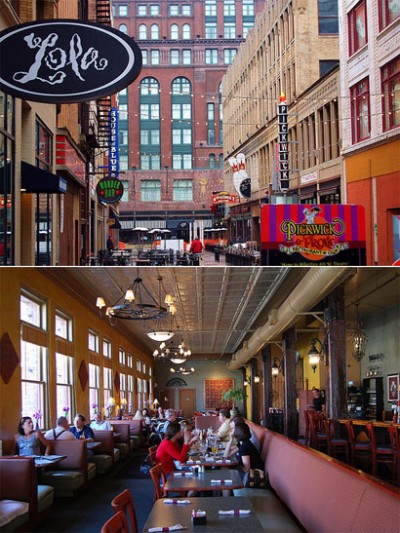 The district is Cleveland’s first neighborhood and downtown’s oldest commercial center, an industrial center from the late 1800s through the middle of the 1900s until manufacturing declined across the country and businesses left. As is common, artists began inhabiting the buildings in the early 1980s, and redevelopment of the district began in the late 1980s and continues today as a favorite retail/entertainment destination of creatives. The eight-block area has attracted $450 million in public and private investment, with 39 restored warehouses, 28 of which are certified historic structures, resulting in 3000 residents and a 2500 daytime workers, though many of the fine artists have since moved 40 blocks to the east, and to nearby Cleveland neighborhoods of Tremont or the St. Clair Superior.

From George Nemeth, longtime Cleveland creative and author of the Brewed Fresh Daily blog on local happenings, “I love the Warehouse District! I work in the heart of it at Optiem, an interactive marketing agency. Our offices are converted warehouse space. There’s an awesome loft-like feel to them. Many of the 20-somethings that work there have apartments in the nearby buildings. Today, my co-worker and I walked over to Tower City. It was full of downtown workers having lunch. The Warehouse District is Cleveland at it’s most metropolitan. It’s much safer when there are residents living downtown. Most of my friends who live downtown are active and engage when it comes to the condition their neighborhood.”