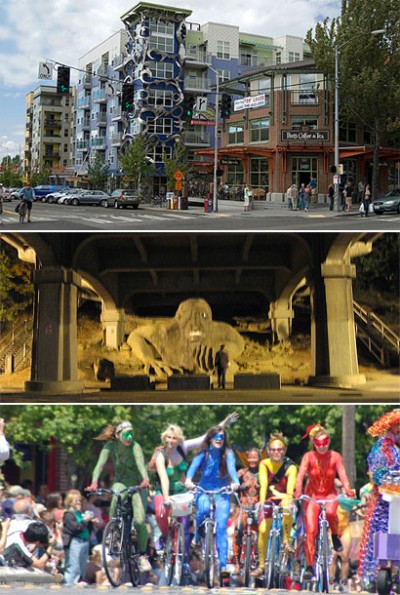 What’s the sign of a great city? Check out a slide show providing the answers of nine accomplished creative entrepreneurs to the question, Why Seattle is the Most Creative City of 2009. You’ll notice a vast diversity of favorite places and things to do and experience, from a Hogwarts-like reading room to a giant concrete troll (middle photo) to the venerable Pike Place Market.

“Fundamentally, this is a frontier city, a place of pioneering spirit and big ideas,” Richard Tait, founder of Cranium.
“The drive to succeed is there, but the Seattle style of innovation is humble innovation,” Joe Fgere, owner of Tutta Bella pizza joints.
“You know one of the cool things about Seattle? The person standing next to you doesn’t hate your guts because of how successful you are,” Jenn Risko, publisher of Shelf Awareness.
“The same creativity that led Seattle to be home of Boeing, Starbucks, and Microsoft – and made our municipal utility City Light the first carbon-neutral utility in the nation – will help us restore the planet and boost our economy,” Seattle mayor Greg Nichols.