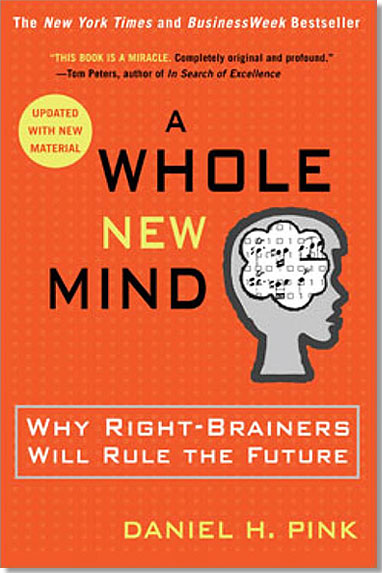 While they weren’t brand new cars, Oprah did leave 4500 copies of A Whole New Mind: Why Right-Brainers Will Rule the Future by Dan Pink on the chairs of the graduating students she was addressing (Stanford 2008). Why?

In her words, “Pink, a former chief speechwriter for former Vice President Al Gore, presents a convincing argument that our country is entering a new era — the so-called conceptual age — during which right-brained skills such as design and storytelling will become far more crucial than traditionally left-brained skills such as accounting and computer programming. While the latter skills are readily outsourced, transformative abilities such as empathy and creativity are crucial in a new age animated by a different form of thinking and a new approach to life.” Dan refers to this evolved era as the Conceptual Age.

I highly suggest reading her CNN article, Why right-brainers will rule this century, which includes a signature interview with Dan Pink, as well as a link to an excerpt from the book, which by the way has been out since 2005.

In this Conceptual Age, Dan suggests that we’ll need to complement our left-brain directed reasoning with six essential right-brain directed aptitudes, thus achieving a whole new mind. Just imagine the kinds of creative places, scenes and events that could result… because they will. Here are the six aptitudes, referred to as the Six Senses, in relation to their left-brained complement:

“1. Not just function but also DESIGN. It’s no longer sufficient to create a product, a service, an experience, or a lifestyle that’s merely functional. Today it’s economically crucial and personally rewarding to create something that is also beautiful, whimsical, or emotionally engaging.

2. Not just argument but also STORY. When our lives are brimming with information and data, it’s not enough to marshal an effective argument. Someone somewhere will inevitably track down a counterpoint to rebut your point. The essence of persuasion, communication, and self-understanding has become the ability also to fashion a compelling narrative.

3. Not just focus but also SYMPHONY. Much of the Industrial and Information Ages required focus and specialization. But as white-collar work gets routed to Asia and reduced to software, there’s a new premium on the opposite aptitude: putting the pieces together, or what I call Symphony. What’s in greatest demand today isn’t analysis but synthesisâ€”seeing the big picture, crossing boundaries, and being able to combine disparate pieces into an arresting new whole.

4. Not just logic but also EMPATHY. The capacity for logical thought is one of the things that makes us human. But in a world of ubiquitous information and advanced analytic tools, logic alone won’t do. What will distinguish those who thrive will be their ability to understand what makes their fellow woman or man tick, to forge relationships, and to care for others.

5. Not just seriousness but also PLAY. Ample evidence points to the enormous health and professional benefits of laughter, lightheartedness, games, and humor. There is a time to be serious, of course. But too much sobriety can be bad for your career and worse for your general well-being. In the Conceptual Age, in work and in life, we all need to play.

6. Not just accumulation but also MEANING. We live in a world of breathtaking material plenty. That has freed hundreds of millions of people from day-to-day struggles and liberated us to pursue more significant desires: purpose, transcendence, and spiritual fulfillment.”

In the next entry, a look at how these six senses apply to crowdsourcing places for creatives.