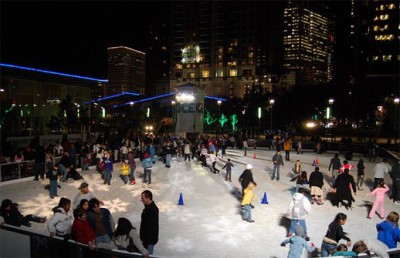 It’s a fairly common phenomenon, when things are bad, people seek camaraderie. When things become difficult across an entire city or economy, people seek a sense of community.

So, how does that translate to our own cities and neighborhoods? A renewed, and perhaps, more authentic interest in contributing to both public gathering places and local venues, specifically third places. Not only that, but crowdsourcing is a natural community-building methodology for doing so. Project for Public Spaces, the leading resource for presenting public placemaking examples, contributed to a Urban Land Institute article, The Upside of a Down Economy, that provides several recent case studies of successful public gathering places.

Restaurant-driven neighborhoods – Tony Goldman, CEO of Goldman Properties, has helped transform NYC’s Soho, Miami’s South Beach and Philadelphia’s Center City by sticking to his formula of investing in a minimum of 17 local restaurants (not chains), inviting local stakeholders to join in, as a means of establishing a meaningful sense of place and ownership.

Wildly popular public market – Granville Island, a public waterfront in Vancouver, British Columbia, Canada, attracts 10 million visitors per year to its 280 local businesses because of its distinct character as a diverse and comprehensive public gathering place. It’s secret? It’s long been organized as a public market based on local community groups, and remains the epitome of authenticity.

Detroit’s great hope – Read more about Campus Martius and it’s key role in the revitalization of Detroit in this previous blog post.

Public market in Santiago, Chile – A public-private effort turned a desolate plaza adjacent to one of the city’s busiest transit hubs into SubCentro, a vibrant market and public space, soliciting the opinions of its residents from the beginning.

The growth of public markets in Barcelona, Spain – Rising prices in supermarkets have spurred a renewed interest in public markets, even encouraging private markets taking to the streets within a larger program to help revitalize neighborhoods.

Norway’s 13 ‘cities of the future’ is a formal program by the government to help 13 cities become models for sustainable development, of which preserving the cities’ almenninger (public spaces) is a major priority.

What stories are you familiar with?