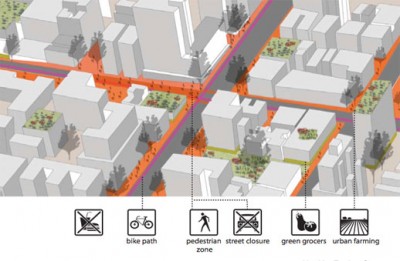 In fact, according to a study covered in Time’s Why Exercise Won’t Make You Thin, exercise may not be as important as being in an environment where you’re constantly moving. As the article states, “Many obesity researchers now believe that very frequent, low-level physical activity – the kind humans did for tens of thousands of years before the leaf blower was invented – may actually work better for us than the occasional bouts of exercise you get as a gym rat. It would be better to distribute the movements throughout the day.”

Of course, here we are again looking at walkable communities as a healthy solution. In fact, the folks at the United Health Foundation, The Urban Design Lab at the Earth Institute at Columbia University and Collaborative Initiatives at MIT provide a simple framework for such frequent, low-level physical activity, calling it healthy zoning (see image above).

The image above hardly needs explanation. Health is the primary reason for the weekly Ciclovia street closure in El Paso, Texas, initiated in Bogota, Colombia, inspiring similar programs throughout the U.S., and even the closing of NYC’s Times Square to cars completely.

Thanks to Erin Caricofe for the reference.