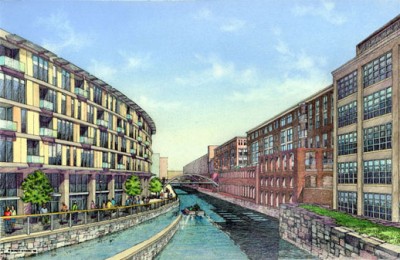 The City of Lowell, Massachusetts is committed to growing its creative economy.

An historic downtown canal will be the centerpiece of the Hamilton Canal District, a new 15-acre, transit-oriented, mixed-use neighborhood. Renovated historic mills will be integrated with one million s.f. of new construction to provide loft apartments and condominiums, shops, offices and public parks. The development follows LEED ND (Neighborhood Development) principles, 30% of the buildings will be LEED certified, and an extended trolley system will link downtown and the City’s commuter rail station.

How serious is the City of Lowell in investing in its creative economy? From its financial/market feasibility report in its master plan:

“With a diverse population, street-level culture, and access to active recreational activities, Lowell is an example of an authentic urban environment and is poised to draw members of what Richard Florida, author of The Rise of the Creative Class [a must read if you haven’t by now], terms â€œthe creative class“…

Attracting and keeping such creative individuals is a key component of the City’s comprehensive master plan, and a priority of the [Governor] Patrick Administration, which announced in 2008 the appointment of a first in the nation Creative Economy Director [then 32-year old Jason Schupbach].

With a broad mix of uses, the thoughtful redevelopment of historic buildings, innovative, sustainable new construction, pedestrian oriented streetscapes and canal walks, and access to public transit, the Hamilton Canal District development recognizes the importance of creating an environment that has by definition a high â€œquality of place.â€ The Hamilton Canal District recognizes Lowell’s creative community as a key element to the development’s success and the continued success of the City.” 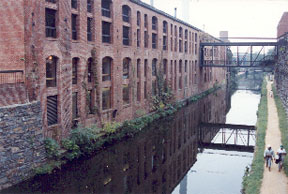 You can download the presentations on the developer selection phase and development proposal phase.