The attitude among creatives is increasingly becoming aligned with the notion that Cars are the new smoking (the article lists ten reasons why). What’s more interesting is the growing evidence…

New York City’s Department of Transportation Commissioner is featured in Forbes magazine, Taking Back the Streets, on the city’s progressive investments in prioritizing people over cars, featured throughout this site’s Pedestrian Only/Car Free section.

Seasonal street closings have rapidly become the norm… Summer Streets in New York City (see latest video) is in its second year and looking to expand, as is Sunday Streets in San Francisco (see latest video); Pedestrian Sundays continues its sixth year in the Kensington Market in Toronto, Canada; inspired by Bogota, Colombia’s Ciclovia, started in 1976. You can check out an older Planetizen review of these closings here. 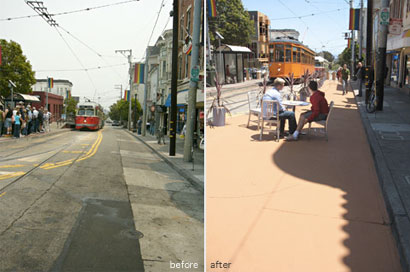 The City of San Francisco plans to open two new pedestrian plazas in September 2009 via its Pavement to Parks program after the wild success of its first project, Castro Commons (pictured here twice).

Cities are taking the pedestrian movement so seriously that they’re paying close attention to what color the streets should be.