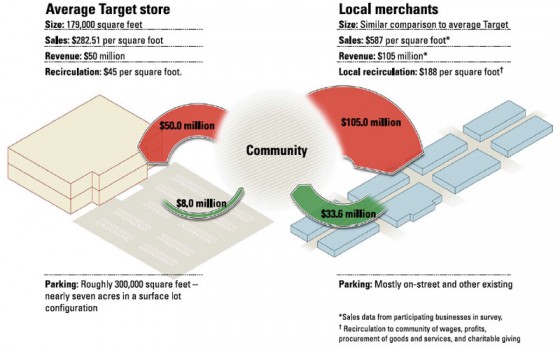 How much of a greater impact do local retailers have on nationals? The Urban Conservancy recently completed a study with Civic Economics to answer just that, called Thinking Outside the Box: A Report on Independent Merchants and the New Orleans Economy. Keep in mind this is just economics, and not considering the cultural impact on the local neighborhood.

According to the study, when compared to leading chain competitors on a per square foot basis, local retailers:
– generate twice the annual sales;
– recirculate revenue within the local economy at twice the rate;
– have four times the economic impact in terms of wages, profits, procurement of goods and services, and charitable giving.

The study was actually a result of looking at two popular approaches to redevelopment for New Orleans:
1. The urban model involves the restoration and rejuvenation of existing commercial corridors.
2. The suburban model requires the development of large-format retail on large parcels, anchored by general merchandise and home improvement warehouses augmented by a mix of junior anchor and small in-line spaces.
See the urban and suburban development types here.

Another conclusion of the study: If New Orleans consumers were to shift 10% of all retail activity from chains to locals, the result would be the equivalent of injecting an additional $60 million annually into the local economy in the form of recirculated dollars that would otherwise have left the area, and $235 million regionally.