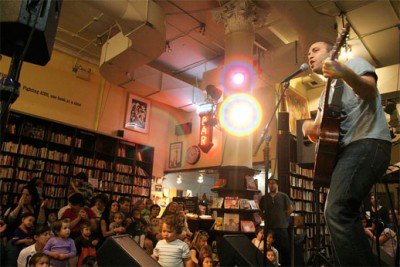 First of all, most local bookstores simply can’t compete with the likes of Barnes & Noble and Amazon, despite their advantages supporting the local economy. However, it does have a chance if it’s more than a bookstore, adding a few revenue-generating elements. Why the focus on a bookstore? Because if there’s one business that seems doomed in today’s world, this is it, so figuring out a way to not only survive, but thrive, says a lot for many other local independent businesses. Here are some trends that may point the way:

A new localism. Newsweek’s There’s No Place Like Home states, “After decades of frantic mobility and homogenization, we are seeing a return to placeness…” In the 1970s one in five people moved annually; by 2006, that number was 14%, the lowest rate since 1940 when these stats were measured. By 2008, the total number of people changing residences was less than those who moved in 1962 (with 120 million fewer people). People are reconnecting with local businesses. The Oxford Dictionary Word of the Year in 2007 was locavore.

The cooperative, communal, community model. Check out Clay Shirky’s (author of the crowdsourcing book, Here Comes Everybody! article, Local Bookstores, Social Hubs, and Mutualization, where he talks about allowing the locals themselves to share in the ownership and/or management. Some features of such an arrangement include:
“- Reservable space for book clubs, writers rooms, or study carrels;
– Membership with buy-back options for a second-hand book market run out of the same space;
– Certain shopping hours reserved for members or donors; use of volunteer labor, like a food coop;
– Sponsorships from the people or businesses in the neighborhood most interested in the social value of the store and most interested in being known as local machers.”

One bookstore that utilizes many of the aforementioned ideas is the Housing Works Bookstore Cafe in Soho in New York City, which features a cafe and live music performances, is staffed almost entirely by volunteers, and is partnered with a nonprofit.

An important point in all of this is that both locals and chains will continue to exist, so it’s a matter of where and how – see The difference between a natural cultural district and a corporate cultural district.