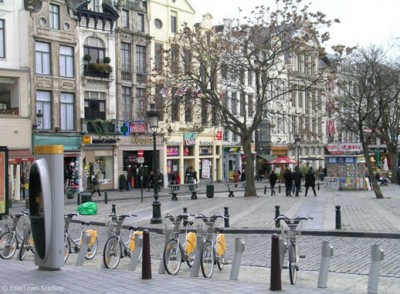 Providing retail for the emerging, growing, progressive creatives market doesn’t follow the same rules as provided by retail consultant Robert Gibbs in A primer on retail types and town centers. It’s a good guide for the general population, so let’s see what happens when we converge and remix it with the 19 urban development types for creatives.

First of all, for creatives, it’s no longer just retail, but retail entertainment. Second, retail no longer follows a simple ownership, product formula, as you can see with just a bookstore as an example. Third, creatives tend to favor local vs. chain, if for no other reason than it’s a reflection of their own individually creative, unique mindset.

So, using the primer on retail development types as a guide:

Corner stores – 1500 to 3000 s.f., supported by 1000 households. This is a common model in urban neighborhoods, and throughout Europe. Other than the usual ‘corner store’ market items however, the merging of a cafe or even pub experience would add the more social element that creatives prefer. In fact, rather than the corner store, you often find a corner cafe or pub (retail entertainment) instead.

Convenience centers – 10,000 to 30,000 s.f. supported by 2000 households, though creatives prefer something much smaller than a 1.5 mile radius (3 miles in between), which is suited to more suburban densities. Again, rather than just the usual laundry, mail, bank services, creatives prefer a mix of cafes, coffeehouses and pubs featuring outdoor dining to give it a more people-rich environment, with vibrancy extending into the evening as well.

Neighborhood centers – 70,000 to 90,000 s.f. supported by 6000-8000 households in less than a 1-mile radius, with 15-20 small retailers. Same as above, but larger with at least one supermarket anchoring the other businesses. Again, stores such as the dollar store, DVD rental and shoe stores are better served elsewhere (in regional shopping centers or online), and instead creatives prefer a mix of retail entertainment, from bookstore/cafe/theaters to restaurant/cafe/bars, to art gallery cafes and art studio coffeehouses. Also, health-oriented venues are on the rise, like bike shops, yoga studios and fitness centers.

The following retail types do not appeal to creatives. Listed from most to least attractive…

Community centers (more aptly named big box centers) – 250,000 to 350,000 s.f., supported by population of 50,000, 4-6 mile radius. These are what are referred to on this site as corporate cultural districts, mainly because these include your Target, Best Buy, Bed Bath & Beyond, Office Max, Home Depot, Borders, huge supermarket, etc. anchoring smaller chains (i.e. Chipotle, Starbucks, cell phone services) and a mix of larger national and local restaurants. The key for creatives is to locate these in industrial or business areas rather than a historic neighborhood, while also integrating residential. These are necessary amenities for many, but they don’t need to be located where the above retail types are, nor do they need convenient access beyond a few trips a month, if that. This is typically where you’d find multiplex theaters. The more entertainment-oriented, the more transit-oriented it needs to be.

Lifestyle centers – Main street malls. This is essentially the reincarnation of the shopping mall, with the same stores, but organized in main street form. They typically don’t appeal to creatives because they’re usually located on suburban sites (ie former mall sites), are mostly national chains, have few restaurants, fewer cafes and even fewer coffeehouse venues, and are not transit-oriented.

Regional centers – The standard shopping mall surrounded by parking. 900,000 to 2 million s.f. At this time, not only are these are no longer being developed, but they’re being converted into mixed-use developments. An outdated product of the industrial age. Teenagers will need to find a new place to hang out soon.