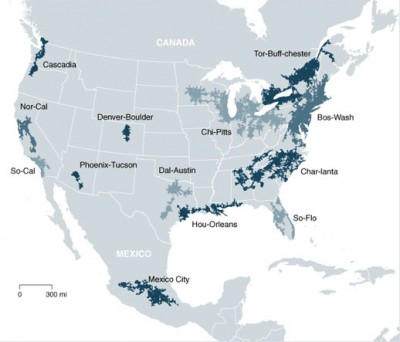 From a creative economy point of view, are towns, cities and even regions not within a ‘mega-region’ (10 to 50 million people) not worth investing significantly in?

From the Prospect article, Ruse of the Creative Class, responding to the premise behind economist Richard Florida’s upcoming book, The Great Reset: How New Ways of Living and Working Drive Post-Crash Prosperity,

In a warm-up to his next book, Florida has been arguing that the recession has so decimated many cities and regions that it’s time for the country to cut its losses and instead encourage growth in places that are prospering, like Silicon Valley, Boulder, Austin, and North Carolina’s Research Triangle. And the rest? In his much-cited cover story in the March issue of The Atlantic – “How the Crash Will Reshape America – he delivered the harsh news: “We need to be clear that ultimately, we can’t stop the decline of some places, and that we would be foolish to try. We need to let demand for the key products and lifestyles of the old order fall, and begin building a new economy, based on a new geography.”

Now, if you’re purely focused on getting a job in the creative economy, the bottom line presented here is that you should move to a creative mega-region (pictured for North America above, and click the following for Europe, Asia and the world), and you’ll be hearing about this argument more and more. However, as any regular reader of this blog knows, that’s not the case if you’re a ‘creative’, where quality of life matters just as much, and usually more.

So the question here remains for those in non-mega-regions, ‘How do I bring more of the creative economy to me?’ While Richard’s new book will advocate an answer along the lines of, “Move, or don’t expect any federal or even state investment,” what your locale needs to focus on (other than the typical scattershot policy approach) is, ‘Who are the people with the most potential to create jobs in our creative economy, and how can we build a sense of community (virtually and physically) among them? That’s what this site is all about.