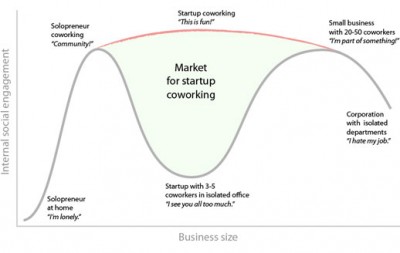 We all know the economy needs jobs. Not industrial economy jobs, which we’re transitioning away from, but knowledge economy jobs. But where did the Apples, Microsofts and HPs that fuel today’s economy come from? That’s right, startups.

Our entry Gazelles + Economic Gardening = Prosperity highlighted this very trend back in 2003. In 2007, we posted how every neighborhood needs a coworking space. Today we’re in a jobs crisis. The time is right to converge these two trends.

First, Blake Jennelle, founder of Philly Startup Leaders, the “largest and most active entrepreneur community in Philadelphia,” provides some insight into the world of startups, typically 3-5 employees that are looking to grow based on a predominant product or service:

“Delusion is the hidden startup killer. It leads to self destructive decisions in every aspect of the business. And delusion thrives in isolation.

Teams in isolation tend to imagine market demand that’s not there. When they do, there’s no one to question them. For solopreneurs, it’s even worse, because they don’t have teammates nor enough customers to keep them anchored to reality.

Coworking can be great for solopreneurs because they are surrounded by a diverse group of people who can keep them from getting delusional. But coworking doesn’t fit startups, even with only 3-5 people.

Coworking starts to get less affordable when you’re renting more than one desk, and it starts to feel distracting to your team. But these are minor issues.

The real problem is the cultural gap between freelancers and startups. Freelancers value their independence above all else. They want to stay small and don’t want to be chained to any one project. They would rather dabble in at least a few at any given time. Startups are the opposite. They demand focus, sometimes single-mindedly. And they don’t want to stay small, they want to grow. Fast.

I don’t typically recommend that startups hire freelancers because startups need continuity in their team and 110% commitment. I also don’t recommend that freelancers work for startups, because they might start to feel trapped — like they are finding themselves in the job they just tried to escape.

Second, we present a graph that illustrates the need and opportunity for startup coworking spaces, a much more contemporary version of business accelerators, and more focused on creatives. Because they’re geared toward more creative, innovative startups, these typically aren’t government or university run. They can certainly be assisted by either though, as long as the somewhat irreverent startup vibe stays true. If you know of one, or would like to start one up, please comment below.

One previous entry you may want to look at: the entrepreneurial development system modeled after the A, AA, AAA levels of professional baseball.

If there’s one job creation lesson to be learned here, it’s this: The graph shows there may by a purely psychological reason why solopreneurs don’t want to be startups… unless there was a more socially engaging environment to be in.