What would a car free city be like? DC residents got a taste of that when the city experienced record snowfalls in early February of nearly five feet, the most since 1898. Just about the only thing shut down were the cars. Instead, the city was alive with people in the streets like no other day.

As you can see below, the local coffeehouse was packed, and the buzz of conversation was a few notches higher than usual. Now you may be wondering, what about other cities that have significant snowfall all the time? Well, cars and drivers in DC aren’t equipped for such weather, nor is the City, so the overall consensus was simply to allow the roads to be uncleared for a day or two.

Streets normally filled with cars and traffic were replaced by streams of people, and not only that, there was a sense of winter wonderland euphoria in the air. Big smiles, spontaneous high fives with strangers, impromptu laughter – is this what a city would be like with no traffic? Well, the truth is, that’s what Washington DC was for a day or so, and people were in a great mood. 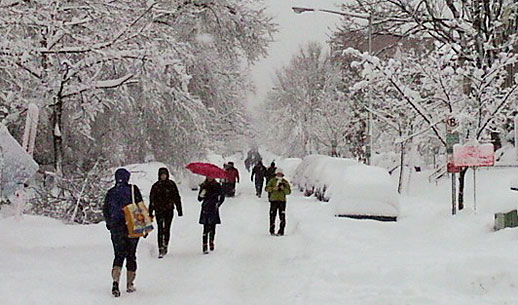