Mayor Bloomberg, “In this day and age if you go around the world, all the other great cities have already tried to reduce the number of cars on their streets and convert some of the open spaces into space for other people.“

“Three-fourths (76%) of New Yorkers surveyed think the area has improved, so do two-thirds (68%) of people in the region, and 60% of Times Square workers, 60% of property owners and building executives, and 70% of local retail managers.” Also, a 63% reduction in injuries to motorists and passengers and a 35% reduction in pedestrian injuries.

Dan Biederman, President of the director of the 34th Street Partnership, “This is a 21st century idea. The 20th century idea was three lanes of noisy, annoying traffic, going right past all these great institutions and stores. The 21st century idea is seating and pedestrian life dominating, and traffic being subsidiary.”

What are the city’s largest retailers saying? â€œIn the year that a new Broadway has become a reality, we’ve seen a new vibrancy in the Herald Square area. More people are taking the time to enjoy the area and experience first-hand the exciting opportunities that exist on one of the world’s most famous streets. We applaud the Mayor and the City of New York for their vision of the City’s future,â€ Macy’s Senior VP of External Affairs Ed Goldberg.

What’s next for Times Square? â€œWe will now design a world-class public space that’s a new center stage for the greatest city in the world,â€ Department of Transportation Commissioner Janette Sadik-Khan.

Read more in the NY Times and Streetsblog 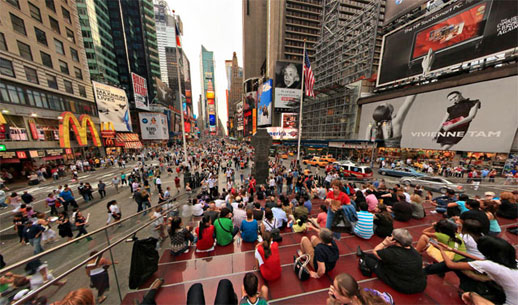