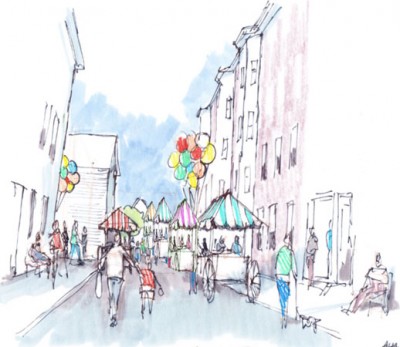 As part of the ï¿¼American Institute of Architect’s (AIA) Sustainable Design Assessment Team (SDAT) invited to East Bayside, Portland, Maine, here’s the section of the final report that explains how to establish a crowdsourced sustainability system, as summarized by this previously posted entry and video. Stay tuned for the AIA SDAT’s final report to be posted here. Why am I posting this? It may serve as a guide for other neighborhoods like East Bayside that want to attract investment, yet preserve its character.

Implementing an economically, socially, environmentally sustainable plan for East Bayside is a â€˜cloud’ problem, whereas clouds are defined as nebulous, diffuse and escape attempts to pin them down. It’s not a â€˜clock’ problem, requiring precise, specialized technical expertise to solve. Thus it requires a â€˜clock’ problem-solving system, not a clockmaker. The following system, defined by its steps for implementation, involves the ever-increasing usage of crowdsourcing as a cloud-problem-solving system.

1. Identify the Sponsor for the project, their values and principles, their needs, their vision and goals for the program. The East Bayside Neighborhood Organization would be one candidate. There needs to be just one organization being primarily accountable, otherwise no one will. Even with two-person partnerships in business, experts strongly recommend that one partner has at least 51% ownership. I would define ‘vision’ as the vision for East Bayside’s economic, social and environmental sustainability.

2. Define the triple bottom line/3BL (economical, social, environmental benefitting) vision of the champion sponsor. How is this vision going to benefit its residents, workers and businesses on those three levels?

3. Identify supportive Stakeholders (those with cultural and economic impact on the project), their values and principles, needs, vision and goals. Let the Stakeholders use the vision statement from above as a guide. The same process needs to happen as with step 1, for all those that represent the neighborhood in terms of the triple bottom line. One is needed for youth, and one is needed for the immigrant community. If there not one Stakeholder to represent each of the immigrant communities (ie Somalis, Sudanese…), there should be designated representatives for each of those groups to work with the immigration community champion. Others include business owners (and there already is a women’s business owners group with Sally Streuver), entrepreneurs (Jeff Anthony, Mohammed Dini), environmentalists, neighborhood groups, etc. It should be any group that’s willing to collaborate on action.

4. Define the economic, social and/or enviromental sustainability visions and goals of the Stakeholders. Each of the stakeholders need to provide such a vision from their respective groups. How? This is where Richard Goll’s programs with youth and Reemberto Rodriguez’s techniques with reaching out to people of diversity in their homes and social circles, as outlined in their reports, is critical. New Stakeholders are always welcome, as long as the interests don’t start to overlap or groups start to compete. Again, see Richard and Reemberto’s reports regarding this.

5. Host an informal meeting with the Sponsors and Stakeholders to symphonize their triple bottom line visions into a consensus vision. The Sponsor then adopts this as their new vision statement. Each group still retains their own vision statement, but realizes they are alone if they base their actions on it.

6. Draft a written agreement from Sponsor-Stakeholder group that it will fundamentally involve the Stakeholders in its planning and execution in exchange for those Stakeholders providing commitment to its success. Everyone needs to be accountable for how they’re going to contribute, and that needs to be in writing. Most important, the Stakeholders need to be emotionally committed.

7. Determine metrics and schedule for success. Consolidate goals from each of the Stakeholders and the Sponsor, and redefine into objectives with dates that are easily evaluated. For instance, the entrepreneurial group may have an objective of 50 members in its social network in six months, or the immigrant community will host a neighborhood food festival by the end of the year.

The leaders were identified in the first phase, but much of the real work happens with the people who live and work in East Bayside. Only a fraction of that latter crowd will spend their time and energy to contribute, and it’s not necesarily fair to the rest to identify this group as ‘better’, so a term I prefer using is ‘beta community’, or ‘test community’. These are the people who don’t talk about change, they’re the ones who actually try it out. If things go well, the beta community eventually simply becomes the community as a whole, or they can continue to try new things.

1. Identify the Champions (the ‘lead followers’ most likely to be willing to spend time and energy supporting the vision and objectives) from the greater creative community. Champions usually identify themselves, and are the best candidates to become Stakeholders. See this TED video on the importance of ‘lead followers’.

2. Host an informal meeting with the Sponsors, Stakeholders and Champions to brainstorm ideas, and identify which ones are the most implementable in terms of both crowd support and funding. For those at the March 30, 2010 focus group regarding the creative community, this is that 3-hour process. See attached for the summary of that meeting, masterly notated by Lori from the Muskie School of Public Service Public Policy program. Fortunately, many of the candidates for Sponsor, Stakeholders and Champions were there. A brief summary of that meeting of up to people who sat in a circle, which is important:

Part 1: Introductions, Groups
a. Roundtable introductions and what you hope to get out of attending.
b. Roundtable mention of one idea someone else mentioned (other than your own) that resonated with you.
c. Identification of groups of 4-6 people that share common interests. To do so, mention the most common ideas/themes, and consolidate or subgroup them into groups of 4-6 people. If the group becomes larger than 6, certain individuals tend to talk too much, while others don’t say anything, while the value of their ideas to the group may be just the inverse.
â€¨Optional break: This is a good time for the groups to start talking to one another.
â€¨
Part 2: Brainstorming, Brainwriting, Identify Crowdsourceable Projects
a. Break off into the interest groups. Give them 3-5 minutes to come up with a brief vision statement. There may already be one in existence that represents the interest. Have them stop when time is up and look up.
b. Have them brainstorm ideas for implementation in roundtable fashion for about 10 minutes, allowing people to interrup, skip or mention more than one at their turn. Don’t provide any further instruction. Have them stop when time is up and look up.
c. Ask them to prioritize not more than two to three implementable ideas for each timeline: Less than a year, 1-5 years, more than five years. Thus, a total of 6-9 ideas. Have them write each of the ideas on a sheet of large paper, at the top of each idea’s own column. This allows the crowd to add comments below the ideas (â€˜brainwriting’). 10 minutes. Place the sheets on the wall.
d. Brainwriting. This is another fun part. Ask those in the crowd who represent public or private resources/capital to raise their hands. Ask the crowd to then, in a free-for-all, checkmark any ideas they like (only one per person per idea) and comment if they like. For those that identify themselves as resources, place a dollar sign if they think it’s an idea they’d invest in.
e. The ideas with the most crowd support, but no funding interest are the most viable/neighborhood initiatives. The ideas with the most funding interest, but little crowd support lets the crowd know where the money is waiting for them. The ideas with the most crowd support and funding interest are the most ‘crowdsourceable’, and should get started right away, especially with the people who expressed interest.

Part 3: Develop Implementation Plan for Crowdsourcable Projects
(We did not get to this in the March 30 meeting)
a. Break off into the three groups that expressed the most interest as far as crowd support, for both funding and no funding, by show of hands. Make sure to record who’s in each group, and provide them an opportunity to either continue to convene online, or join an existing group with the same vision.
b. For those groups willing to continue beyond this exercise, provide them the opportunity to name a Sponsor to represent their group, ideally funding representatives, a vision statement and prospective members. Upon completion of these, they should now be given ‘Crowdsourcing Project’ status.
You now have a much better idea of what’s possible, based on every single person in the room. As a side note, this aforementioned exercise can be done online using the Bubbly crowdsourcing web tool: bubblyapp.com, which is something I developed for this very purpose. In fact, this exercise was modeled off of this web tool.

3. Initiate online social network customized for crowdsourcing (ie ning.com, which is free) stating the vision and objectives with timelines, and listing the interest groups and summaries of meetings. The objectives need to be updated with whether or not they were achieved, so groups learn to both be accountable, as well as better provide realistic objectives.

Host monthly beta community meetings of Sponsor, Crowdsourcing Project Sponsors, Stakeholders and Champions. Remember, we’re talking about implementing triple-bottom-line sustainability here, not a free-for-all town hall meeting to express your gripes. It’s up to you how much to make this a public meeting.
a. Provide an agenda listing the Stakeholders and their objectives that are posted on the social networking site.
b. Have each Stakeholder report their progress based on their objectives.
c. Have each Crowdsourcing Project Sponsor report their progress based on their objectives. The value of these is that they represent the values of the Stakeholders in the form of a project.
d. The discussion of the meeting should be focused on two things:
1) What actions can be taken to fulfill the objectives of the Stakholders through the Crowdsourcing Projects that represent them. Remember, that’s what the exercise in Phase 2 was about: Translating the diverse interests of everyone into implementable projects. This is where the problems can be identified on the ‘clock’ level now that the ‘cloud’ is defined.
2) If any Stakeholder does not feel properly represented in any of the Crowdsourcing Projects, how this can be solved.

Keys to Success
– The more that the Crowdsourcing Project Sponsors attract both public and private sources of capital/resources as active members of their team, the better the chances of implementation.
– If a Crowdsourcing Projects start to bog down, host a public meeting and run the Phase 2 exercise on its behalf. Also, the next time you run the Phase 2 exercise overall, see if this project is still a priority.