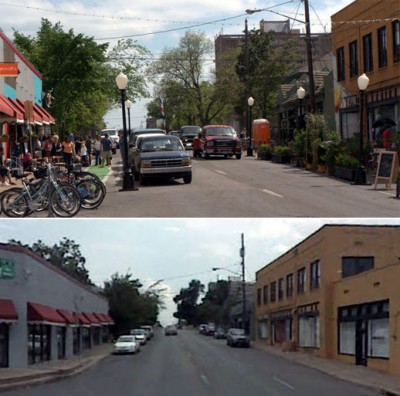 If you’re looking for a model example of crowdsourced placemaking, check out the Better Block project in Oak Cliff, near Dallas, Texas.

For two days on April 10th and 11th, 2010, locals changed a car-centric thoroughfare to a people-friendly destination, complete with temporary businesses like a cafe, flower market, kid’s art studio, and featuring historic lighting, cafe seating, live music and more. All with a budget of $1000! The event was such a success that members of city hall now want to make it permanent. See the before and after photo above, and video below.

Thanks to Jason Roberts, one of the project’s champions, for alerting us to this project, “I wanted to pass along a story related to a group of active residents including myself, who retook a blighted car-centric block in our neighborhood and converted it to a complete street…we installed temporary businesses as well (cafe, kids art studio, and flower/gift market) to show the potential for the types of businesses that could thrive if the city changed its form. Your website was one of the inspirations for the project. We crowdsourced the whole endeavor and brought in 40+ people from the community to pull the project off.”

A little bit of history from Jason, “The idea for the event came after our friends opened a small bicycle shop on the corner here. In the summer last year, we held a bicycle block party and invited friends and kids out. The event brought out 300 or so people and was so packed that police arrived and said, “You’re going to have to get these people out of the street… the street is for cars”. We wished we had caught that on film, but instead set out to reshape the block completely to show the potential for reviving the old buildings.

We flaunted every ordinance we could openly like. For instance, Dallas has a law limiting the ability to open a fruit stand, so we put out a fruit truck. Dallas requires a $1000/year permit to have cafe seating, so we threw in our own. City staff said that lighting across a street is too expensive and would require an extensive permit process… we did it in 1 hour and cost us $50 in used Christmas lights + bailing wire.

All in all, it was more successful than we could ever imagine. We had residents come out who had lived in the area for 50 years that said, “How do we make this stay?!?!…Can I start a petition???” Pretty amazing stuff.”

Here’s one of the most important parts of the story: Their city council member worked to find $130,000 to help make this and more changes permanent. The point of a ‘beta block’ and a ‘beta community’ if you will, is to make it easier to go permanent.