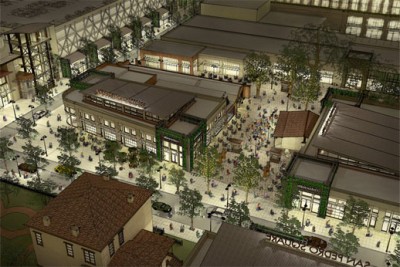 When people are asked what’s missing in their downtown, you’ll often hear things like a ‘central place’ for the community to gather for public events, dining and people watching; a public market; or a farmer’s market. The San Pedro Square Public Market aims to be all of the above.

What adds a tremendous amount of character and history to the square is that its central outdoor plaza highlights San Jose’s oldest building, a small, humble building known as the Peralta Adobe. The square is surrounded by two retrofitted buildings and a brand new building.

One of the most attractive attributes of the square is its commitment to being casual, down to earth and affordable. As retail leasing agent Steve Borkenhagen states, “We thought it had more of a funky casual approachability that some of the other markets don’t. The Ferry Market [in San Francisco] is more upscale, whereas Granville [public market in Vancouver, Canada] is everything – you’ve got the suits there, you’ve got casual people off the street. We’re not trying to be Valley Fair or Santana Row [upscale]. We’re trying for more of the opposite.” 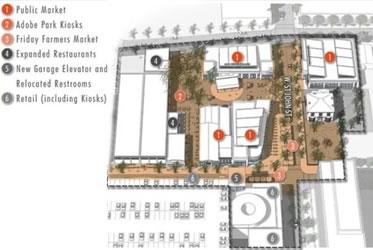 There’ll be lots to do, see, and shop in the square. In addition to the public market, a Friday farmers market that already runs from May to December in San Pedro Square will continue, and a second farmers market is being considered for Saturdays. The plaza will host live jazz and other music performances on its stage via an outdoor stage. The square will also be one of the few places in the U.S. built for outdoor movie watching (check out this great example in Switzerland).

The hours are also more in keeping with being a round the clock destination. Shops will be open from morning to later at night, 10 am to 10 pm, and some food shops will open at 6 am while others will close at midnight. 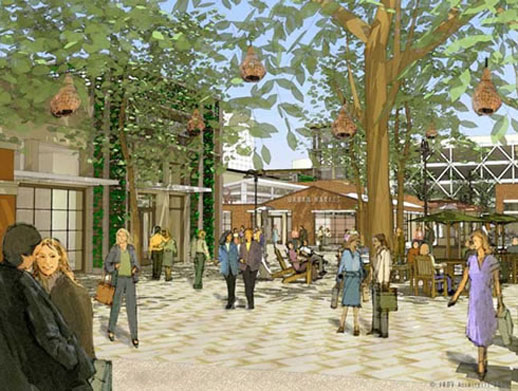