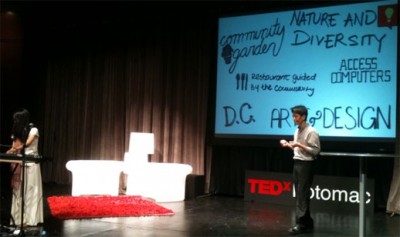 While they put together the videos for the TEDx in Washington DC yesterday (tedxpotomac.com and #tedxpotomac on Twitter), here’s the basic transcript for the presentation on crowdsourced placemaking. The presentation team included Neil Takemoto speaking, D’Blend (Juan Botero and Lina Almansa) doing the visuals and videos, and Yoko K performing live organic electronica music. Hope this holds you over…

[Intro visuals and music feature open call answers to the question ‘What place would you be passionate about creating with others in your neighborhood?’]

How do we make such a place a reality?!

You need two things before you start.

Why haven’t we always done things this way? We really couldn’t. Crowdsourcing technologies like social networking technology didn’t become the norm until only very recently. People may have always wanted to crowdsource places, but it just wasn’t practical.

To understand how this works, let’s run through a example with a cafe. Now, an idea has to come from a person, so let’s start there. We’ll call her â€˜Linda’.

[Visuals and diagram animations begin] – Linda has an idea for a triple bottom line cafe.
– The first step is to build a small, enthusiastic community of followers, so she tells her friends about the cafe, and because it’s triple bottom line, she finds many of them share her passion. Those people tell their friends, inspiring them.
– While her pre-cafe, or â€˜beta’ community of followers may certainly be enthusiastic enough… it’s not large enough. This is where crowdsourced placemaking comes in.
– The beta community uses the most effective social networking tools at the time to let everyone and anyone know what’s going on with the cafe. This is what’s known as open source.
– As more people get involved, they develop a sense of what it’s going to look like when it’s done.
– This is the crucial tipping point when the project takes on a life of its own, inspiring a community of followers that’s now large enough and still enthusiastic enough to become a reality.
– That is the essence of crowdsourced placemaking.
[Visuals and diagram animations end]

This is actually based on a true story in DC. However, the beta community of 500 people is still only about halfway to the tipping point. Though, they did make the front page of the Sunday Washington Post. How will this story end? It’s really up to you to decide. The beta community decided to name the cafe Elements, by the way.

In the very near future, there will be thousands of stories like this. The question for you is, do you want to read about them, or be a part of them?

These stories are already happening around the world, from Colombia to Australia to Texas, which has one of the best recent examples of crowdsourced placemaking…

Just last month in a Dallas neighborhood called Oak Cliff, a group of people felt they had a better vision in mind for a street in their lifeless downtown. So, as a two-day demonstration, with a budget of just a thousand dollars and permission from the city, they crowdsourced the street into the pedestrian-oriented place they wanted it to be. This â€˜Better Block’ project was such a success, that not only do the residents want to make it permanent, but so do members of city hall, and that’s what they’re working on right now.

So DC? What will be our story? I’d like to show a quick one-minute video, because it’s really important to communicate that each and every one of you could be a part of itâ€¦ You’ll hear from Garlin who has a shared passion for a social entrepreneurship coworking space called The Hub DC, Christian who is actually part of the crowd for the Elements cafe I talked about, and Kat who expresses what it feels like when an idea for a triple bottom line live music nightclub called Gaia starts to become a realityâ€¦

This is crowdsourced placemaking. For those of you that want to be part of the story, all the projects mentioned here, among others, are listed at crowdsourcedc.com. There’s even a place to post your own idea.

Because TED is more than just ideas worth spreading, it’s ideas worth doing. So maybe one day very soon, we can all tell our own stories, of crowdsourced placemaking.

Photo by our fantastic presentation coach, Jill Foster of Live Your Talk.