It’s not the first bike sharing system in the U.S. (which is SmartBike in Washington DC with 120 bikes and 10 stations), but the B-Cycle bike sharing program in Denver with 400 bikes and 40 stations was the largest at its April 22, 2010 launch (Nice Ride with 1000 bikes and 75 stations in Minneapolis now owns that distinction as of June 10, 2010) and definitely the most tech relevant. It’s also the first one designed and developed in the U.S.

What makes B-Cycle so unique?

– Three innovative companies, Humana, Trek and creative agency Crispin Porter + Bogusky designed the B-Cycle system for the U.S. with expectations of 50,000 bikes in a dozen cities within three years, starting in Denver.
– Like bike sharing programs throughout Europe (Paris is the largest with over 20,000 bikes/1400 stations), the first half hour is free. It’s $1.10 the next 30 minutes, $3.30 the next 30 after that, and increasingly higher, mainly to encourage shorter trips and reduce the likelihood of theft. Annual membership fees are $65/year, or one day for $5, a week for $20, $30 for a month.
– An iPhone app tells users how many B-cycles are available at each station, and how many B-cycle docks are open for when it’s time to return the bikes.
– You can keep track of your rides visually (see image below) like the popular Nike Run program.
– Health care provider Kaiser Permanente provided $450,000 in funding for the first three years, as a means of promoting preventative care.

Read about B-Cycle’s March 2009 debut at SXSW, and the story behind its key designer, Alex Bogusky. 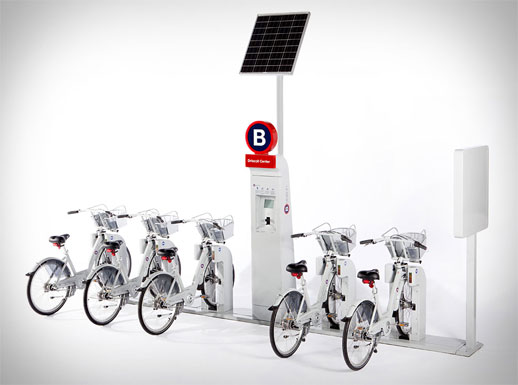 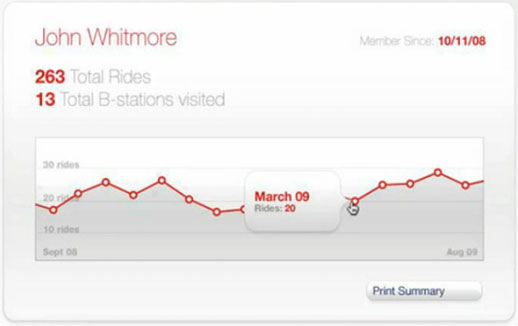 Here’s a short and sweet summary of the Denver B-Cycle user experience.