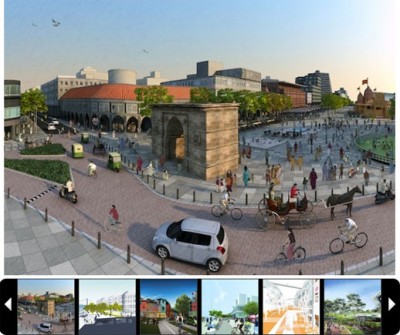 What will our cities look like in 2030 when we’ve run out of oil? The Our Cities Ourselves exhibition (June 24-Sept 11, 2010), a program of the Institute for Transportation and Development Policy provides an intriguing answer to that question by matching ten of the world’s top urban designers with ten of the world’s most dynamic cities. The general theme? From the exhibition…

“In the middle of the 20th century, cities across the U.S. were redesigned to accommodate the car. As people flocked to the suburbs, cities were retrofitted with highways and parking lots. Roads expanded, public transit declined and so did our cities. In the decades that followed, cities around the world imported this auto-dominant urban design and began to suffer from its devastating impact.

Our Cities Ourselves proposes an exciting alternative path. Underpinning the images on show are ten principles developed with Jan Gehl, the noted Danish urbanist (see Copenhagen the birthplace of the pedestrianization movement?). With these as foundations, the architects produced visions of iconic sites projected to experience at least a doubling of residents by 2030.”

Check out a quick slideshow of the ten proposals via Fast Company magazine’s How to Design Cities for People Instead of Cars presentation (or click on the image above). Here’s a quick recap highlighting what makes these proposed designs so darn pedestrian-friendly:

1. Ahmedabad, India – Pictured above, I believe this is the first image associated with India on this site. Pedestrian-only plaza; textured streets which bikes share equally with cars (and horses!); arcades, awnings, and outdoor dining areas shaded by trees providing a transition from building to street/plaza; a culture that supports micro cars and electric vehicles. HCP Design, India.

Thanks to Michelle Hoffman of The Burning Desire for the reference!