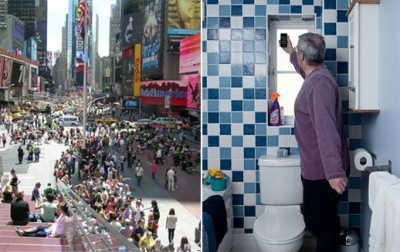 Here’s a ‘looking at the bright side’ perspective for iPhone users in New York City and San Francisco that don’t like cars: The worse your iPhone reception, the more likely you’ll have a pedestrian-only plaza.

For those unfamiliar with the situation, it’s so widely known that New York City and San Francisco have spotty iPhone reception that Stephen Cobert on the Cobert Report, based in New York, joked that the one thing the iPad and iPhone have in common is that you can’t make phone calls on it. On the other hand, in New York City pedestrian traffic has become so heavy that they’re running out of sidewalk space.

It’s not really a coincidence that the two cities with the lousiest iPhone reception are also the only two cities that have such a comprehensive pedestrian plaza program.

It’s simply a matter of traffic congestion, whether it’s a lack of digital or asphalt infrastructure. Once a place becomes exceedingly popular, as New York City and San Francisco most definitely are, both digital (cell/internet) and physical (walking/biking/driving/transit) activity rise significantly.

The good news for pedestrians is that both cities are already beginning to pedestrianize the asphalt infrastructure to evolve with the knowledge economy (digital) from an industrial economy (asphalt).

As far as a digital one? While AT&T claims to have upgraded its digital infrastructure, the larger holy grail of free public wi-fi (infinitely less costly than the existing free asphalt network) is still something mostly only countries outside the U.S. are enjoying.

Photo of Times Square Plaza. Rate and comment on this place at Cooltown Places, or submit your own favorite.