Economic development was defined in the industrial age as the increase in the amount of people in a nation’s population with sustained growth from a simple, low-income economy to a modern, high-income economy. [Someone needs to change this on Wikipedia]

It’s definition in the knowledge age is more in line with sustainable development, universally known as meeting the needs of the present without compromising the ability of future generations to meet their own needs. Its second definition in Wikipedia is more in line with this, the process and policies by which a nation improves the economic, political, and social well-being of its people. Almost, but not quite, a triple bottom line approach.

The point is, the evidence shows we’re rapidly evolving toward sustainable economic development as the norm…

In ABC News, Smart Money in Real Estate Is on Smart Growth, Alexander von Hoffman of Harvard University’s Joint Center for Housing Studies states, “People are increasingly pushing for policy that supports an urban lifestyle, and leaders from the White House to town halls are listening…”

– “This year, President Barack Obama created the Office of Sustainable Housing and Communities to coordinate federal housing and transportation funding with local development. The president is helping to coordinate and reinforce a movement that was already gaining momentum. He’s helping those local and state leaders.

– “In California, for example, Governor Arnold Schwarzenegger signed Senate Bill 375 in 2008, requiring each region to adopt a “sustainable communities strategy” to reduce greenhouse gases and give transportation projects top priority for funding.” …such as The Railyards urban village in Sacramento, pictured above. 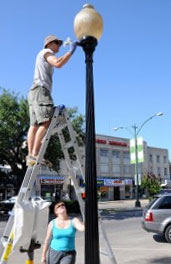 – Public and private entities did a 60-40 split on the $132 million development costs for a smashingly successful Rockville Town Square in Maryland.

– Operations for a new streetcar system in St. Louis will be covered by a transportation tax residents in the surrounding area approved by 97%, which many say gained such support for sustainable economic development reasons than mobility reasons (ie sustainable urban development follows new transit stops).

– If neither government funded nor locally funded sustainable economic development is for you, then how about locally tasked? Those Oak Cliff residents are at it again (see Better Block and ‘Better Plaza‘ projects), saving their City a chunk of their own money by volunteering to paint streetlights that a private company was overcharging for.

Oak Cliff continues to prove that it’s amazing what can get done when people work together rather than complain alone.