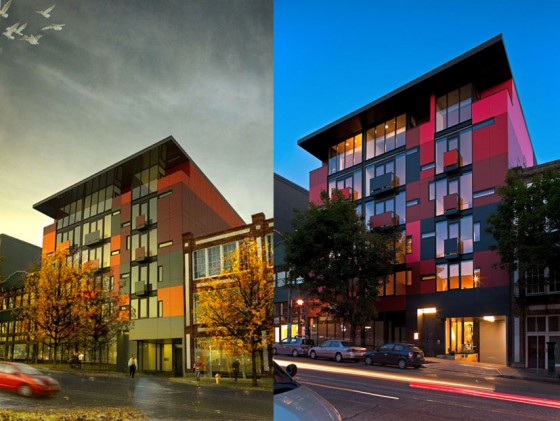 What’s the key to revitalizing a downtown and/or neighborhood via urban development?

First off, a couple of definitions.

1. Crowdsource it. Sam states to go to the neighborhood first to find a resident to champion it, but why not get several champions and dozens of followers (hundreds depending on the size of the project) by fulfilling their values and needs?

2. Find a city that actually wants infill and is motivated to cooperate. You’re at a disadvantage if you already own a site that you must develop – a way out of that is to be prepared to sell and find another one. If a city doesn’t care (especially if they prefer a corporate cultural district), it may be best to do just that. If you’re a stuck, overwhelming crowd support (see #1) may be your saving grace.

3. Understand what the crowd wants to invest in. Micro loft housing under 500 s.f. so they can afford it? Studios? Three bedrooms? Green certified? This is one step beyond market research, and one that greatly reduces risk even further.

4. Don’t over-do the retail. According to Kennedy Smith formerly of the National Main Street Center, there is 40 s.f. of retail per person in the U.S., and we’re supporting less than 20 s.f. However, if a crowd substantially supports a certain kind of business (usually a social one, like a coffeehouse, microbrewery), then go for it.

5. Feature an outdoor dining area. This is the most effective in enlivening a street, assuming the accompanying business can be supported (see #4). In fact, this is what people expect in a natural cultural district.

6. Determine true parking demand. Parking is not only extremely expensive ($20,000-$40,000/space), but it also takes away from revenue generating space like outdoor dining areas, as the Parklets program in San Francisco is demonstrating. If your crowd directly tells you they don’t need it, don’t force feed it to them, and use that as leverage if the city insists.

7. Utilize ‘backyards’ for public space. The article states to provide access to retail parking in the rear, but this often isn’t the case in many natural cultural districts. What you’ll find in the rear are hidden courtyards that make the most appealing places to eat, drink and hang out.

8. Take the ego out of design, think humanistic. The problem with the architecture field is that your salary is proportional to the awards you win, and the awards are often judged based on how much the design stands out from its neighbors – otherwise why give out an award, right? The homes in the neighborhoods with the highest property values do not win awards, they award their residents with, well, higher property values. They usually follow unspoken human-proportioned design principles.

9. Pre-sale and pre-lease. This is a result of crowdsourcing, and is definitely proven to help you significantly secure your loan. Having an established customer base is why chains are so well financed, and now non-chains can compete via crowdsourcing.

10. Hire a crowdsourced placemaking team to ensure the developer and the local market are properly and effectively represented.