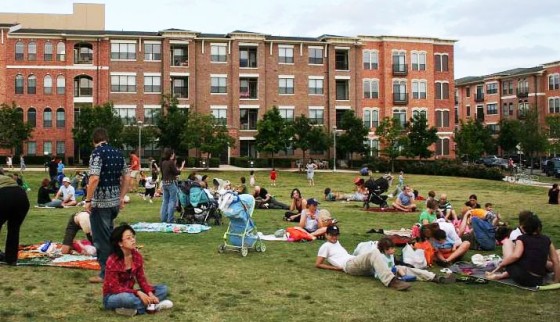 The vast majority of large-scale mixed-use development projects in the past have been predominantly national-chain retail. With the rise of the conscious consumer however, that rigid investment formula is beginning to crack, such as with The Piazza in Philadelphia and now with The Triangle in Austin, Texas, a 22-acre mixed-use urban infill development of 529 apartments, 150 condos and 120,000 s.f. of retail.

Not surprisingly, it was initially planned as a typical shopping center with national chains. However, you guessed it, the local crowd passionately communicated that they would support local businesses instead. Of the 31 businesses currently leasing space, 11 are restaurants (local), and of the 20 retail businesses, only three are national chains providing services that most people already rely on nationals for (cellular service, banking, office supplies).

In addition, The Triangle is the weekly weekday host of the Austin Farmers’ Market, which takes place in its central park (pictured above). The market, along with seasonal festivals, is organized by the Sustainable Food Center, a nonprofit that emphasizes organic and local food sources, fitting right in with Austin’s progressive values.

How did all this happen? It starts with a developer, Tom Terkel, that’s willing to listen to the crowd. As Tom explains, “These are retailers and restaurants that can be found nowhere else but Austin, and they help make Austin what it is. A long time ago, this ceased to be [only] about making money and became about doing something with a positive impact on this area of the city.”

Of course, the local retailers couldn’t be happier, as one merchant states, “We didn’t want to be in a strip shopping center with a bunch of chains. We’re glad we have local Austin neighbors like RunTex and SoLa. That appeals to us.”

Crowd request: If anyone has a photo with people in it that captures the restaurant/retail scene at The Triangle, please share.