Most every major city has car sharing, but it’s currently not like bike sharing, where you can pick up a bike in one location and return it to another. Well, car sharing in 2011 isn’t just going to match that service, but take it one step further.

First, Paris is building on the success of its Velib bike sharing system and rolling out Autolib (introduced in 2008 here) in 2011. You’ll be able to borrow one of 3000 all-electric cars for $20 a month, plus an additional $7 for every half hour. However, the ‘killer app’ is that you can return it to any one of over 700 stations in the city.

Now, what about all those people who just can’t let go of their cars, or simply need them for one or two crucial trips a week? Now, theoretically, every single one of those cars can become part of a car sharing system, earning their owners additional revenue by renting out to their neighbors. Whipcar provides just this service in 300 towns across the UK (in only 4 months of service!), and Spride Share is now piloting a service in the Bay Area. Think of it as having a housemate or basement tenant to help pay the mortgage, contributing between $4000 to $7000/year.

Personally, I think many of us will be looking forward to the stackable, transforming, instantaneously customizable go-kart-type MIT City Cars that’s coming in a few years… check out the 1:55 mark of the video above. Users even log in to the car to have interior settings automatically set themselves up inside (ie driving style, music), and even the color of the car outside!? (check out the 3:57 mark)

Juicing up via an Autolib car sharing system station in Paris, France. 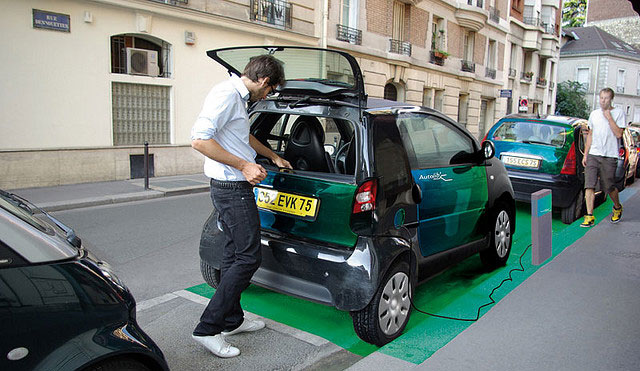