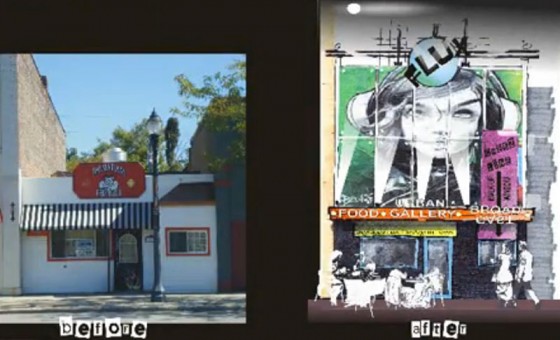 While a restaurant concept initiated in 2007, now known as Elements, is still being crowdsourced into a community-oriented, vegetarian, locally-based third place, a team of creatives in Lansing, Michigan have taken it upon themselves to crowdsource a restaurant in 90 days. Now that’s a timeline fellow creatives can get enthused about.

The video below provides a window into the crowdsourcing process. Ideas to whet the crowd’s appetite are thrown out, as the image above shows, with one idea allowing artists to transform the facade periodically. You can actually participate in the crowdsourcing process yourself on their website (they encourage people from all over the country, and as in Elements’ case, people from all around the world) – they’re currently providing successive weekly polls to narrow down what the theme of the restaurant should be.

Important project specs:
– The building is already secured, a former fire fighter-themed diner with 24 seats. Having the building under control is absolutely necessary if you’re looking at an expedited process.
– Crowdsourced decisions to be made: The name, logo, branding, interior design, exterior colors, design and face of building look, menu ideas, menu price range. These can obviously vary by project.
– None of the founding team has any significant restaurant experience.
– Comments are hosted via Facebook, Twitter and the website, though no discussions forums at this time.

Why crowdsource a restaurant? Check out “How local indies can compete with national chains”. Keep in mind that if you’re an entrepreneur where your individual artistry comes first, crowdsourcing probably isn’t for you. But if it’s about serving and inspiring the community, then absolutely yes.

Read more about the project in The Daily Crowdsource.