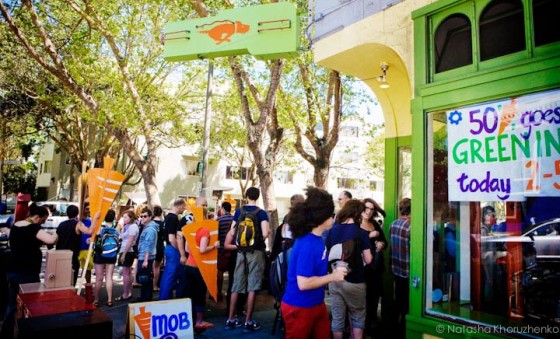 There aren’t too many times you’re going to hear crowdsourced placemaking discussed at the same time with growing local independent businesses, but the time is now. Check out the following description of “Crowdsourcing, “Carrotmobs” and Local Business” from the Washington DC based Kojo Nnamdi Show:

“Mom and Pop” businesses can’t necessarily beat prices at big box stores or national chains. So some local independent businesses are experimenting with new ways to engage customers and build loyalty. We explore how business owners, ethical consumers and labor activists are harnessing the power of online communities and crowdsourcing to support the local economy.

One of the concepts that best applies crowdsourcing to local businesses, at least on a short term basis, is the carrotmob, “where a community patronizes a local business in a small time period (i.e. one evening) to reward a business’s commitment to making a socially responsible change to their operations.”

The guests on the radio show (including yours truly), who didn’t know one another before the show, are now discussing how to do an “inverse Groupon“, where instead of having 24 hours to buy a 50% off deal that can be redeemed any day for months, residents will know about upcoming 50% off deals months in advance, but redeemable only on one night, just like carrotmobs, and with no coupons needed.

Instead of the money going to Groupon (which takes half of the deal), it will go to a group like Think Local First to not only help promote the businesses and their deal on their one day, but manage an optional program where the crowd can stay, meet the business owner, and offer solutions to the owner’s most vexing problems (i.e. How do I get more traffic on Mondays? How can I better use Twitter?).

Listen to the entire show here or via the show’s program page.