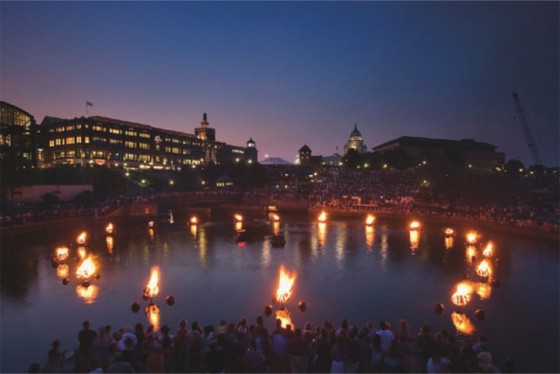 Is investing in the arts, as it relates to placemaking, profitable? Try this quote, coming from a real estate development organization (ULI), “There is a growing body of evidence that thoughtful investment in arts and culture initiatives can generate significant economic benefits for cities large and small. Looking at data collected across numerous studies, along with the broad array of recent arts and culture plans and projects, one will likely conclude that the right strategy and implementation approachâ€”whether initiated by the public sector or by private interestsâ€”can result in significant increases in property values, revenues, and jobs.”

Americans for the Arts, a national nonprofit, obviously agrees with this. The facts from their “Arts and Economic Prosperity III” report may be more compelling: the nonprofit arts and culture industry generates $166.2 billion in economic activity annually, provides 5.7 million full-time jobs in the U.S. and generates nearly $30 billion in revenue for federal, state, and local governments every year where government spend less than $4 billion annually to support the arts (a 7:1 return).

Miami. An investment in the restoration of art deco hotels in South Beach lead to a tourism boom, and ultimately an art fair in 2002, Art Basel, now considered with its founding sister event in Switzerland as the most prestigious art fair in the world. In 2009, its 40,000 attendees generated almost half a billion in economic activity. That in turn spawned 15 to 20 satellite fairs that helped the revitalization of the light-industrial Wynwood District, now hosting over 90 galleries and numerous restaurants. Feeding into and out of this momentum, developer Craig Robins invested in several blocks of derelict buildings north of Wynwood and created a district of interior design studios, restaurants, retail and open spaces, now known as the prestigious Miami Design District, hosting Design Miami, today the most important design show in North America.

Boston. Here it’s all about the housing. The Artist Space Initiative is a city housing program that legislates policies allowing artists to reside in industrial areas, Boston’s Center for the Arts provides artists with affordable studios in the South End, catalyzing further vitality and investment.

New York City. The Ford Foundation provides a $100 million, ten-year grant to support arts spaces and housing because it believes it “can play a significant role in boosting local economies.”

Denver. In 1989 voters approved the Scientific and Cultural Facilities District (SCFD) and a 0.01% sales tax for the arts, whose $42 million in funds in 2007 sparked nearly $1.7 billion in total economic activity in the region, $331 million was generated from cultural tourism. Taxes paid in 2007 from arts, cultural, and scientific nonprofits totaled $21.3 million.

Chicago. It’s $500 million public/private investment in Millennium Park is estimated to add $1.4 billion in value to the adjacent real estate over the next ten years.

In a 2010 report, “Creative Placemaking”, one of the most effective creative placemaking reports ever produced, Ann Markusen and Ann Gadwa for the National Endowment of the Arts provide the following 14 case studies:

Finally, what are the key ingredients in creative placemaking success? The report provides its six Components of Successful Arts-Oriented Placemaking Initatives, as follows:

1. Creative Initiator – Finding that one person or small team that starts it all.
2. Designing Around Distinctiveness – Build on existing expertise and characteristics of place.
3. Mobilizing [Government Will] – If your city government isn’t supportive, good luck.
4. Garnering Private Sector Support – If no one’s looking to invest in it, good luck.
5. Securing Arts Community Engagement – This is more than working with arts leaders, this is about crowdsourcing the time and investment of thousands of its patrons.
6. Building Partnerships – Figuring out a way for all of the above to work together.

So, who’s your community’s Creative Initiator?…