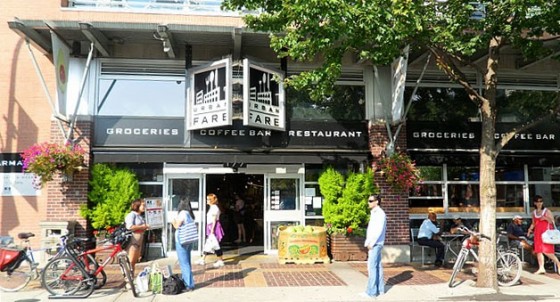 We know cities are cool again, and as a result supermarkets now think so too. We also know auto-oriented suburban supermarkets with vast parking lots in urban area won’t fly. So how are the next generation of urban supermarkets fitting in? By getting smaller.

Under 5000 s.f. corner stores, micro grocery stores: These not-so-big neighborhood grocery stores under 2000 s.f. have always fit in just fine, just don’t call them Mom & Pops anymore (an image search will show you why not). Why? Because they’re human-scaled, walkable, potentially ubiquitous and require no parking. In other words, timeless. Examples: The 2000 s.f. Local D’Lish in Minneapolis, MN and 550 s.f. Mayberry Foodstuffs in Cincinnati, OH. Also, check out the Healthy Corner Stores Network supporting underserved communities with healthy food options.

5000 – 15,000 s.f. cafe supermarkets, neighborhood supermarkets, co-ops, food halls: This is that sweet spot in size where the average urban dweller can do most of their shopping, and where it becomes so difficult to compete with economies of scale that these stores are typically regional chains, unless it’s a co-op, an extraordinary community asset when it exists. One local approach is focus on not more than a handful of locations (some say anything over five stores that aren’t all in the same city constitutes a chain), or host a local cafe. The New Seasons Market in Portland, Oregon provides 90 bicycle parking spaces, almost three times the number of car parking spaces. On the chain side of thing, Trader Joe’s and Fresh & Easy Market at least create their own brands, emphasizing affordability, healthy eating and a friendly atmosphere.

20,000 – 40,000 s.f. destination supermarkets This is the maximum size a neighborhood supermarket should be in natural cultural districts, and even mega-chains like Wal-Mart understand this, though yes, it’s still Wal-Mart. At this size, there’s an opportunity to not only provide a full-sized cafe and specialty food stations (like at Urban Fare in Vancouver, Canada, pictured above), but even reorganize the entire store as a food hall a fast-growing trend.

50,000 and up In those increasingly rarer instances when national chains won’t size down their 50,000 to 60,000 supermarkets, they can be located in corporate retail districts, which should be distinct and separate from natural cultural districts. On the positive end for pedestrians, auto parking is completely hidden underground, to the side or above.

Photo of one of three Urban Fare supermarkets in Vancouver, British Columbia, by LKis.It’s one of the most commonly asked questions regarding downtowns, “What should the ideal mix of local independent retailers be to regional and national chains?”