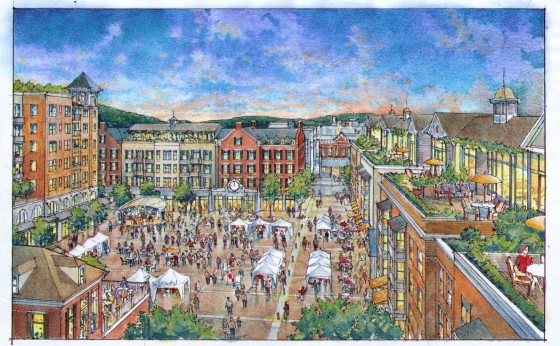 People often ask, “How does crowdsourced placemaking work in the real world?”

This is best answered via real world examples, such as the piazza in Bristol, Connecticut (pop. 61,000) .

As you can see in the December 30, 2010 story, “Blending online and face-face crowdsourcing“, the Bristol survey was just launching, with “A plaza/piazza” garnering a mere 9 likes at the time. Master developer Renaissance Downtowns, which is partnering with the City of Bristol to develop a 17-acre former strip mall in the heart of downtown, agreed that if the Bristol crowd (aka Bristol Rising) would attract at least 200 likes for any idea, they would do a feasibility study for inclusion in the site’s downtown concept plan due on April 25, 2011.

The piazza entry exceeded 200 likes by March 15, and has been such a focal point of monthly meeting and online discussions that not only did Renaissance Downtowns complete a feasibility study, and not only they they formally include it in the downtown concept plan, but they made it the focal point of the entire downtown development plan. Also, check out the most popular amenities associated with the piazza that the crowd voted for here, including a bookstore+cafe+performance venue, brewpub/microbrewery, live music venue, public market, restaurant row, free wifi and skating rink.

Now the next question is, will it be pedestrian only, car free? Piazzas should be defined as car free, compared to a plaza in the U.S., which typically isn’t. There is only one other piazza (car free) in the U.S. It’ll be up to the crowd once again to prove that there’s a big enough market to make it financially feasible and a built reality.

Feel free to join the Bristol Rising community from anywhere in the world, follow on Facebook, and help bring attention to this effort!