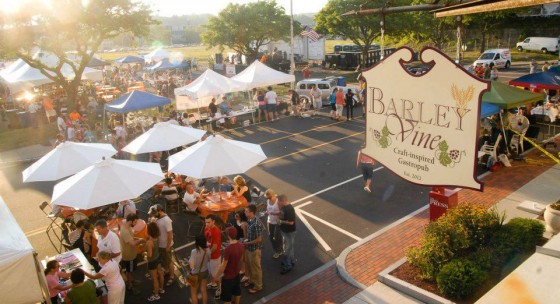 This is a follow up story to “Bristol crowdsources piazza into downtown plan”.

When Renaissance Downtowns, a visionary triple-bottom-line real estate development firm that won an RFP to develop 17 acres of failed shopping mall into a thriving downtown destination, decided to give crowdsourced placemaking a shot in October 2010, they didn’t quite expect such, well, extraordinary results…

For Renaissance, the growth of the crowdsourced placemaking community, known as Bristol Rising since an innocent happy hour of 14 people on November 4, 2010 (2300 members today), has led to a planning and approval process that has been completed in a fraction of the time that a normal process would have taken. Master plans alone can take 2-3 years to complete. In Bristol, the Concept Master Plan, the main plan for the entire downtown, was completed in just nine months, submitted in April 2011 and receiving municipal approval in just six months in October 2011. Dozens of Bristol Rising members showed up to support the plan at its hearing, many in their signature orange Bristol Rising shirts, cheering on the council members to ensure they approved the plan, which they did.

In addition, zoning amendments were approved in February 2012 with Bristol Rising support, followed by a Special Permit of Unified Downtown Development Plan, the first official land use plan, submitted on the last day in April 2012, and approved in June 2012, with of course, Bristol Rising members cheering in attendance. Renaissance will be looking for the crowd’s support to garner site plan approval for Phase I by year’s end, and immediately work towards securing building permits and ground breaking by early 2013. Check out the plans here.

Now, that’s just with city approvals. In November 2011 Bristol Rising launched a Downtown Living Campaign to identify 400 people who would be willing to live downtown, and they even hosted a face-to-face meetup so these downtown pioneers could meet one another. That was a tremendous success. Yes, they reached their 400 person goal, in March 2012.

Regarding retail, Bristol Rising’s influence has directly resulted in compelling one of its most active members securing a lease for a a craft beer and wine restaurant, the first dining establishment to announce a new lease on its Main Street in decades. Bristol Rising members also announced the July opening of a neighborhood event space in the West End neighborhood, a neighborhood which has struggled to attract any kind of new storefront businesses at all. They even inspired a crowdfunding campaign for a new local brewery, motivated by one of the most requested ideas, a microbrewery. Oh, and they also ‘cash mobbed’ a cafe in April, resulting in a record day for the business.

As far as surrounding neighborhood revitalization, in one of the most drug-laden neighborhoods within the downtown known as Summer Street, Bristol Rising members organized a street clean up, spurring one of its members to establish a new company to buy up and fix problematic buildings, resulting in recent testimonials such as this, â€œHi there, as a new resident of Lower Summer St, I would like to say thank youâ€¦ I think its getting better all the time,â€ and â€œI moved to lower Summer Street at the beginning of this year in order to be closer to work. I am thrilled with the improvements I had seen in the area and I am excited to see what else is in store.â€ Read more about Summer Street’s transformation here.

In August 2011 Bristol Rising members helped organize a one-day demonstration event for their most desired public amenity, a car-free piazza surrounded by storefronts, outdoor dining and exciting events. Expecting 2000 people, the Pop-Up Piazza event attracted 15,000, breaking a record for the most attended event in the city’s history. In August 2012 members continued the tradition as an annual event, again attracting between 15,000 to 20,000 people.

In June 2012, the Central Chamber of Commerce held their Awards Dinner in recognition of eight specific businesses and organizations that contributed to the community over the past year. Renaissance and Bristol Rising were among them as they were presented the Spirit of Bristol Award for their efforts in uniting the community to work towards a brighter future for Bristol.

In October, a long-time active Bristol Rising member opened a gastro pub based on the crowd’s input. Known as Barley Vine, the restaurant is the first dining venue to open in the downtown in years, and has become an overnight institution. Prior to that, startup Firefly Brewery CompanyÂ exceeded their crowdfunding goal to open a microbrewery in Bristol.

Check out a visual timeline of events here.

Believe it or not, they’re just getting started in Bristol. I kid you not. Someone needs to write a book…

If you’d like to learn more, they’ll be more than happy to oblige. This has been one of the best kept secrets in real estate development and community organizing, aside from a NY Times article last year (written before much of what you read actually happened!) For Renaissance, contact Ryan Porter at rporter[at]renaissancedowntowns[dot]com, and for Bristol Rising, contact [mark[at]bristolrising[dot]com].